‘It was like glass shattering’ - homeless children tell their stories 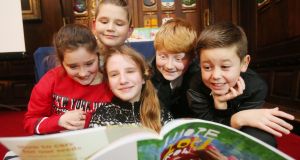 Pictured are Kayleigh Green, Irina Bogdan, Octavian Bogdan, Jordan Leonard and Calum Hughes look at a childrens book from Focus Ireland in which they all wrote a story. Photograph: Leon Farrell/Photocall Ireland.

“The park was near where we lived but we had to move. The guy was selling the house so we all had to move. It was like a piece of glass shattering”.

These are the words of eight-year-old Amir contained in a book written by children of homelessness detailing their lives in the midst of Dublin’s housing crisis. I Hope You Grow was launched at The Mansion House in Dublin last night.

Leonitia Jordan had been renting and moving from house to house since 2008 before settling into homeless accommodations with her three young children a year and a half ago.

Since that time, the four of them have shared a single room in a converted bed and breakfast, but will be moving from the situation Jordan described as “awful” into proper housing in a few weeks.

“It’s been a long year and a half,” Jordan said on Friday .

“I think [THE BOOK]is great because people need to see what it’s like from a kid’s point of view. I don’t think a lot of people realise what homelessness feels like until they’re in that situation.”

Her son Jordan Leonard (10) was one of 15 children aged between eight and 12 being honoured at the launch for their contributions to the book, which was published by Kids’ Own in partnership with Focus Ireland.

Throughout the evening, the students had the opportunity to share one of their written excerpts from the book and meet with executive director of Amnesty International Ireland Colm O’Gorman and author Alan Nolan, each of whom gave speeches at the event.

“It’s been really fun talking about the book,” Leonard said. “I hope people realise that not everything is for life. There may be something bad, but that’s only for a while. It will be good some day.”

Leonard’s optimism - and that of every child who contributed to the “I Hope You Grow” - was noted by writer Mary Branley and visual artist Maree Hensey, who helped the children collect their thoughts for the book throughout last summer.

Branley was most surprised that in their time together, none of the children used the word “homeless” to describe their situation.

“Eventually somebody said, ‘yeah we have all experienced difficulty in moving,’ and that’s how they described it,” Branley said. “They are so clear on what their situation is. Hype and spin and words often don’t address the reality of what these children are in.”

Kids’ Own approached Focus Ireland with the idea for “I Hope You Grow” last year, and both organisations felt it would be an opportunity to raise awareness for children experiencing homelessness in Ireland.

In addition to raising awareness, Kids’ Own acting director Jo Holmwood felt students working creatively with an artist and a writer to produce their own book would be an enriching and irreplaceable experience.

“It’s been amazing to see again and again how resilient children are,” Ms Holmwood said. “How they seek joy and beauty in everything that they see, and in spite of whatever they are experiencing, they have an amazing inner strength that they bring...I think as adults it’s something we could learn an awful lot from.”

Department of Housing national homelessness figures for September show there were 9,698 people, including 3,829 children, in emergency accommodation last month.

“I Hope You Grow” is available for purchase from €12 on Kids’ Own’s website with 50 per cent of proceeds going to support homeless children and families in Ireland.

An excerpt from Amir, aged 8:

“The park was near where we lived but we had to move. The guy was selling the house so we all had to move. It was like a piece of glass shattering. It’s sad and you feel like you might not see your cousins again. All day you don’t get time to rest, you have to pack and pack and pack. I had no idea where I was going.”

An excerpt from Oumar, aged 8:

“I am eight years old. I moved a lot of times, mainly because the landlords sell the house and we have to go. There are three in my family and one baby sister on the way. I haven’t found a new school in Clontarf. Moving is very hard, because you lose the friends you’ve made, and it’s sad because I can’t go to school.”

An excerpt from Jordan, aged 10:

“The green of the grass is bright and rich and full of bright flowers scattered around the edge, creating a beautiful portrait of calmness and serenity. Even the flap of the butterfly wings and the gentle buzzing of the bees as they fly from flower to flower adds to the peaceful nature of the garden.”

An excerpt from Irina, aged 11:

“I was born in Moldova near Romania, but people speak Russian there. I am fluent in Romanian and I am learning Irish here. That means I speak three languages fluently, and I’m learning Irish. In Moldova, I had five chickens and they flew away, sadly. One turtle, eight kittens, three parrots (they barely spoke Russian).

Church of England distances itself from Irish language ruling on gravestone 15:24
Varadkar says Government pushing for quicker easing of lockdown 14:28
Sunniest spring on record in Dublin with rainfall 70% below average 14:26
Housing supports should be increased if Covid-19 payment is cut – ESRI 14:02
14 bank accounts frozen as five men arrested over links to global crime gang 13:36