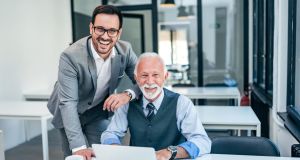 The Government needs to ensure there is access for everyone to “life-long learning and upskilling” in order to meet the challenges of digitalisation, junior minister Pat Breen has said.

Mr Breen, the Minister of State for Trade, Employment, Business, EU Digital Single Market and Data Protection, was speaking at the launch of the Economic and Social Research Institute’s (ESRI) latest study on the ageing workforce in Ireland.

People who are self-employed are more likely to work for longer, the report, commissioned by the Health and Safety Authority (HSA) found, while those with a poor work/life balance or in more physically demanding roles are less confident of working beyond the age of 60.

Mr Breen said despite uncertainty at the moment due to Brexit, “it’s clear by 2025 that our workers and enterprises will be operating in a very different international and national economy”.

He said the Government’s Future Jobs Ireland initiative is centred around embracing innovation and technology.

“Because of the challenges out there, the global changes, we’ll have to improve productivity. There will be increased labour force participation as well and of course enhancing our skills and developing talent - all these are important issues in the midst of transiting to a low carbon economy,” he added.

The data pulled together by authors Helen Russell, Ivan Privalko and Bertrand Maitre of the ESRI shows that Ireland is significantly better at retaining older workers than the average across the OECD - 71 per cent, up from 55 per cent in 2012. The retention rate measures the percentage of workers aged between 55 and 59 who remain in the workforce into their 60s.

There is no gender gap, with both men and women working at an older age. The report notes that professionals tend to leave the workforce earlier, a fact it attributes to their access to higher pensions and greater financial security.

Dr Privalko said while retention of workers aged over 60 in Ireland is higher than the OECD average, there is “considerable scope to increase participation further”.

“However, simply raising the minimum retirement age will not build sustainable jobs. Policies that take account of the variety of push and pull factors leading to early exits from the workplace, including the provision of safe working conditions, is critical to support longer working lives,” he said.

Sharon McGuinness, chief executive officer of the HSA said with older workers making up almost 20 per cent of the total Irish workforce, there are “real implications for all employers”.

“Older workers are more likely to suffer a fatal injury, and this is the case regardless of the sector in which the worker is employed. In fact, workers aged 55-64 are almost twice as likely to experience a fatality compared to their younger counterparts and those aged 65 and over are three and a half times more likely,” she said.

“Although fatal incidents in most industry sectors are relatively rare, injuries and illness are not and I urge all employers to implement tailored safety and health policies designed with the unique requirements of older workers in mind.”

The ESRI study comes as the European Union’s 2020 strategy looks to encourage active ageing, including increased work participation, both for productivity but also for personal wellbeing and “intergenerational solidarity”.