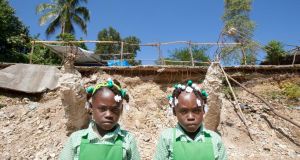 Goal is regarded as the leading force in rapid humanitarian response in Ireland, as seen with its work in Haiti rebuilding schools. Photograph: Alan Betson

Ireland’s largest aid agencies, Goal and Concern, were until recent weeks in talks about a potential merger, The Irish Times has learned.

The discussions, which began late last year and intensified after Christmas, formally ended on Monday evening when Goal’s board opted for a rival merger pitch from Oxfam Ireland. Both Concern and Oxfam had submitted indicative offers to Goal at the end of January.

Goal had also discussed a potential merger with Mercy Corps, a large US-based aid agency with which it had previously contemplated joining forces in 2014, but Mercy Corps did not lodge a formal proposal by the January deadline.

On Tuesday, Goal and Oxfam Ireland announced they were entering formal discussions on a potential merger that, if successful, will result in the agencies coming together under the name Oxfam Goal. Those talks are expected to conclude in March.

A merger between Goal and Oxfam would dramatically reshape the aid sector in Ireland. Goal’s rapid growth in recent years had made it the country’s largest aid outfit, with a turnover of about €210 million in 2015, but the organisation was thrown into crisis last year when it was drawn into an investigation by the US Office of Inspector General into alleged collusion and bid-rigging in southern Turkey, from which Goal and other aid agencies run their Syria operations.

The investigation prompted USAID, the US government’s foreign aid arm, to order Goal to halt procurement of certain items with US funding. The Department of Foreign Affairs reacted by withholding more than €10 million in grant money and in December decided to fund Goal on a year-by-year basis rather than including it in a five-year funding scheme for Irish NGOs.

Although the bulk of the money the Government withheld last year has since been released, the cumulative effects of the crisis have forced the Dún Laoghaire-based charity to downsize dramatically. Barry Andrews stepped down in October from the role of chief executive, Mark Bartolini left the role of head ofits US office as did its influential chief operating officer Jonathan Edgar.

In January Goal announced it was seeking 25 redundancies out of a workforce of about 120 in its Dublin and London offices, and it is understood that in recent weeks three key members of its senior management team – Alan Glasgow, director of global business development; Conor Elliott, director of programmes; and Aidan Stacey, head of fundraising and marketing – have either left the organisation or signalled they will leave in the coming weeks.

The Irish Times understands that senior figures at the Department of Foreign Affairs were aware of the merger talks.

However, according to a number of sources, some members of both the Concern and Goal boards voiced reservations about the idea.

Oxfam Ireland and Concern lodged formal proposals in late January setting out their visions for a potential merger and covering issues such as staffing, branding, timelines and how aid programmes in individual countries could be maintained and developed.

“There was a lot of respect for Concern around the table, but the Goal board made a very cool-headed decision that the Oxfam offer was too good to refuse. It was what they were looking for,” said a source.

Goal is regarded as the leading force in rapid humanitarian response in Ireland, while Oxfam has well-developed policy and advocacy structures in addition to its field operations in conjunction with Oxfam affiliates worldwide.

“Goal’s action-oriented approach and first responder ethos is core to their DNA and has saved millions of lives,” Mr Clarken said. “Oxfam’s approach of practical action and people-led response, challenging the structures and systems that keep people locked in poverty, has led to real change across the world.”

There was a lot of respect for Concern around the table, but the Goal board made a very cool-headed decision that the Oxfam offer was too good to refuse

Goal has almost 3,000 staff working across 17 countries, while Oxfam Ireland has 136 staff, 2,000 volunteers and links to nine affiliate members working in more than 90 countries. Some of the practicalities of the proposed merger have yet to be agreed, including where the new agency will have its offices.