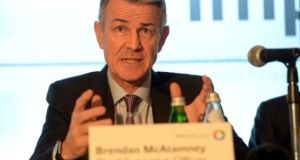 UDG Healthcare chief executive Brendan McAtamney. Said it was too early to tell what the true cost of the pandemic on the business might be. Photograph: Dara Mac Dónaill

About 900 staff at pharmaceutical company UDG Healthcare have either been furloughed or are operating on reduced working hours due to the Covid-19 pandemic, according to chief executive Brendan McAtamney.

Mr McAtamney was speaking after the Dublin-based company reported half-year results well ahead of the corresponding period in 2019, although the impact of the pandemic is expected to be felt more acutely in the second half of the year.

The company, which employs 9,000 people in 29 countries, has furloughed about 5 per cent of its total headcount and reduced the working hours of another 5 per cent to a four- or three-day week.

Staff working on reduced hours have had their pay reduced accordingly, Mr McAtamney told The Irish Times. The company has also made a number of staff redundant, although the figure is less than 20.

The board and senior executives have taken a salary reduction of 20 per cent for three months, which will be kept under “constant review”.

Mr McAtamney said the costs incurred in terms of new equipment and Covid-19 related measures were “not significant”.

About two-thirds of the company’s operating profit is generated by its Ashfield division, which offers advisory, communications, commercial and clinical services.

Mr McAtamney said this aspect of the business involved staff members such as nurses and commercial auditors “working in the field”, but that these activities “have largely come to a standstill”.

He described this as the most significant blow to the company’s revenue streams, but, in order to mitigate it, UDG has transferred a number of those activities to “virtual, remote, online engagement with clients”.

The remainder of the UDG’s operating profit is generated by its Sharp division, which deals in pharmaceutical packaging. The key impact of the pandemic on this element of the business has been the necessity for social distancing.

“We still have and will have social distancing measures within the plants and that will squeeze production a little bit for the remainder of the year,” said Mr McAtamney.

There were also some staff issues in this division.

“In the early stages, they were either sick themselves, or a relative was sick, and they were self-isolating, or, frankly, we had some that were just a little bit frightened about going to work.”

In order to offset the “squeeze on labour”, UDG introduced a number of automation features. Mr McAtamney said there was “no doubt” that some of these elements will be kept on after the crisis has passed.

“The world has changed and everyone knows it,” he said. “That whole online, virtual engagement model was always increasing, but it was increasing from a low base. What Covid-19 has done is give that a turbo boost.”

In terms of M&A activity, the company typically carries out two to three acquisitions per year.

“We have three active conversations going on, and two of those have really slowed down, while one is still pretty active,” he said.

Mr McAtamney said it was too early to tell what the true cost of the pandemic on the business might be, and that it would be June before UDG could make any meaningful projections.

Adjusted diluted earnings per share rose 16 per cent, while adjusted operating profit growth was 24 per cent, growing to $81.3 million, buoyed by continued growth in its Ashfield and Sharp divisions.

1 This charming man: how Paschal Donohoe won the Eurogroup presidency
2 Goodbody’s planned €155m sale to Bank of China falls through
3 ‘My rent here is so low it’s a joke’
4 ‘Sad day’ for House of Ireland as tourism retailer goes out of business
5 Caveat: The tourism sector deserves to be taken more seriously in this crisis
6 Remote workers double as users prepared to pay more for broadband
7 Banks will be judged less on payment breaks and more on next step
8 Two Irish entrepeneurs shortlisted for leading innovators prize
9 Tale of two Disneys highlights differences in Covid-19 strategies
10 Paschal Donohoe’s election as Eurogroup president ‘a great win for Ireland’, says Taoiseach
Real news has value SUBSCRIBE