A tale of two fathers: ‘The way I miss my kids is indescribable’

‘The thing that hurts the most is that you can’t provide your kids’ basic needs. It’s not about luxury’ 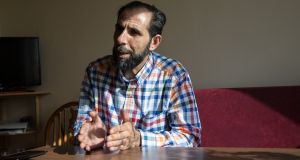 From his upstairs flat in a former holiday home in Mosney refugee centre, Nazim has a clear view of the sea. Outside, past the carefully-tended basil plant on his windowsill, he can hear waves crashing on the shore, the beach separated from the refugees by a high-wire fence.

The first time Nazim (44) saw a shoreline was last year in Izmir, western Turkey. “I was afraid of death but hoping I’d get there and thank God I made it,” he remembers, recounting a 1½-hour dinghy journey across the Mediterranean to the Greek island Lesbos.

The former Arabic teacher got stuck in Greece for nearly a year after the country’s northern border was closed. He was resettled to Ireland in December 2016.

For Nazim, the beauty of his daily scenery is bittersweet. One year after arriving in Meath, he still hasn’t had his application for family reunification accepted. It is generally a lengthy process, but every extra day he worries about his wife and four young children, who remain in Syria.

Nazim’s story is one that highlights an impossible choice faced by many parents caught up in Syria’s brutal and devastating war. Should they illegally move their whole family, entrusting vulnerable children to smugglers who will rush them past militia checkpoints or put them in dinghies which have been known to capsize?

Or should they leave them in a war zone with rapidly changing dynamics, sending one parent ahead to wait a year or more until they can all be legally reunited?

In Daraa, the south-western city where the Syrian revolution started, Nazim worked in a middle school, and his wife was a music teacher. But the conflict brought food shortages and fighting on the streets, and when the family fled their home during heavy bombing, it was looted.

“When we left our house thieves stole everything: electricity cables, shelves, the toilet, everything, they left it completely empty.”

Nazim’s wife and children moved to capital city Damascus, which was safer but had skyrocketing rent prices. Meanwhile, he borrowed €2,500 and set off with a friend. Their destination was Germany, and in 2015, the year more than one million Syrian refugees were welcomed to that country, it seemed they’d get there quickly. Within five months Nazim imagined he’d have registered for asylum, and his wife and children could quickly join him.

First, he had to get out of Syria. He paid smugglers $600 to leave the city of Sweida. Then they travelled from Badia Al-Sham to Aleppo, and from Aleppo to Kalas in Turkey.

As they approached the Syrian border, Nazim’s friend was shot in the back by Turkish border guards. “The bullet stayed in his body until he reached France,” Nazim recalls, sitting hunched forward.

Along the journey “we saw death with our eyes. It wasn’t a dream,” he says. “We were bombed many times. One time we had to crawl under bombardment for 500 metres.”

“They’re looking forward to coming,” he says, with fleeting optimism. “My daughter is in tenth grade and fluent in English. My sons used to have a private English teacher before the war, so it’ll be good for them. I think my kids will score high results in school because they’re good students, they like studying. My daughter was one of the best students in Daraa.”

At first, jokingly, Nazim says his wife reprimands him for not being able to care for his family. Like all of those in direct provision, he receives €21.60 a week. Every two months he manages to send €100 back home, but the sanctions and high inflation mean it’s not enough.

As he speaks, he gazes at the plate of fruit in front of him, and begins to cry. “I want to give a banana to my child,” he says.

“The thing that hurts the most is that you can’t provide your kids’ basic needs. It’s not about luxury. It makes you feel paralysed that you can’t do anything.

“The way I miss my kids is indescribable.”

Just one row of cottages away from Nazim’s flat lives another Syrian family. Faced with the same choice in the same year, they made a different decision.

“I was afraid they would be harassed. I did not want to give the [Syrian)]regime something to extort me with. I used to take my family with me wherever I go.”

Like Nazim, Abu Akmad’s family came through Turkey and across the Mediterranean to Greece, where they also got stuck in a camp.

“I risked the lives of my wife and kids in the sea, but we’ve been through the same danger in Syria,” Abu Akmad says.

“We lost everything in Syria. I wouldn’t add to that loss another loss by me being in one country and my family in a different country.

“We are looking for a new life, and that doesn’t come easily.”

Now, they’re living in a small flat with two bedrooms, a sitting room, kitchen and bathroom. In a sad coincidence, given Nazim’s desire to give bananas to his children, a certificate from Bord Bia has pride of place on their wall. It praises Abu Akmad’s youngest son for eating lots of fruit that week.

As we speak, the nine-year-old arrives home. He’s in third class in a Drogheda primary school (“I like it,” he said, shyly), and his English is already much better than that of his parents.

The family have one other 10-year-old boy and an eight-month-old daughter, born since they arrived in Ireland. She mills around the floor inside a colourful plastic walker, smiling up at her parents.

Abu Akmad is a fake name. He asks us to use it because, even in Ireland, he’s worried about safety. He also feels embarrassed that he’s now a refugee, far removed from the professional he was before, but he’s thankful his family has made it here.

“I didn’t choose it, they chose [for] me . . . but in my opinion Ireland is the best country in the European Union.”

If Abu Akmad has one complaint, it’s that his brother can’t join them. He says Irish officials in Greece said he could apply to bring him from Syria, but the family reunification law has since been changed.

As soon as his own asylum claim was accepted, Nazim submitted an application for family reunification along with €60 for each visa – €300 in total. In September, he received a letter from the Government saying his application was being considered. The wait continues.

If the visas are approved, his family will have to find a way out of the town they’re in, out of Syria, and all the way to Ireland – a country they’d barely heard of on a continent they’ve never been to. Given they’re currently back in Daraa, stuck between government forces and Isis fighters, this could prove a sizeable challenge.

As he talks, Nazim oscillates between hope and despair.

“Being with family is different,” he says. “If you’re with your family, even in the desert, it will be very good for you. And life without your wife and kids for me personally is not life . . . Happiness is not about the place; it’s about the people.”

In Ireland, the definition narrowed last year. Under the current legislation, refugees can apply to bring spouses, children under 18, or parents – if the applicants are under 18 themselves – to join them in Ireland.

A proposed bill would extend this to include dependent grandparents, siblings, nephews, nieces and grandchildren.

The International Protection (Family Reunification) (Amendment) Bill 2017 was developed by members of the Seanad Civil Engagement Group, in conjunction with Oxfam Ireland, Nasc and the Irish Refugee Council.

It has passed third stage in the Seanad and is due for further debate before proceeding to the Dáil.