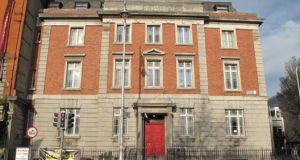 Lefroy House, which is run by the Salvation Army, is to close following negotiations with Tusla, the State child and family agency.

An emergency hostel for homeless minors and support housing for young people leaving State care in Dublin city centre are set to close due to a funding shortfall.

Lefroy House, which is run by the Salvation Army, is to close following negotiations with Tusla, the State child and family agency.

The facility is located on Eden Quay, and provides an emergency hostel for young people called Nightlight, and several supported accommodation flats for 17 to 18 years olds leaving State care.

In recent days staff were informed the services would be shutting due to “significant shortfalls in the operating budget”.

A notice sent to staff, seen by The Irish Times, stated the Salvation Army had been in discussions with Tusla since 2016 over the funding shortfall.

The charity told staff it had a number of concerns with continuing to run the remaining Nightlight hostel, including the “ongoing contractual deficit”, the building’s high maintenance cost, its location, and difficulties recruiting qualified staff.

The seven-bed hostel was set up 20 years ago and provides emergency shelter to children aged between 12 and 18. The Salvation Army said Tusla had indicated “it will continue to support young people and children who would use the Nightlight services.”

However, it said the State agency “do not accept” it had any obligation to take on staff currently running the service.

“We will continue to seek further clarity from Tusla as to how they intend to provide this service in the future, but given their stance on the matter the Salvation Army felt that we now needed to share this information with our Nightlight staff, and to inform all staff assigned to the Nightlight service that your role is at risk of termination,” the notice said.

Aisling Bruen (28), a care leaver who previously used the support flat service, said she was concerned it was being closed.

The “vital” service was a “buffer” for children preparing to leave State care after turning 18, who would find it difficult securing housing in the private rental market. The support flats were an “alternative to private rental or adult homeless services,” she said.

Malcolm Page, Salvation Army assistant director of homelessness services, said the closure of Lefroy House would not impact on the charity’s other residential centres.

“Our aim is to enable the small number of young people who use this facility to be accommodated safely and securely in other support services and we will work with Tusla on transition arrangements. The centre will continue to operate for the coming months to make this as smooth as possible,” he said.

A spokeswoman for Tusla said plans were in place to ensure continuity of the emergency hostel service, and discussions were under way with “the Salvation Army and new service providers.”

Tusla would continue to work with young people leaving State care, to ensure they had “access to other housing supports such as CAS housing, student accommodation or others where needed,” she said.