Two grooms, two witnesses, a harpist and the registrar attended 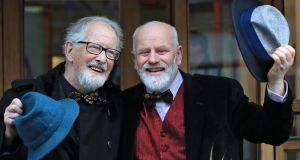 Matt Murphy and Michael O’Sullivan, the friends who said they would marry to avoid taxes, went through with the ceremony on Friday at Dublin register office.

The event, at the former Sir Patrick Dun’s Hospital, on Grand Canal Street, was followed by a meal for the wedding party of five, including a harpist, at the nearby Gasworks bar of the Grand Canal Hotel.

Clothes for Mr O’Sullivan, who is 58, were supplied by Bojangles of Smithfield, with hairdressing by Mark’s Barbers of Stoneybatter. Mr Murphy, who is 85, wore a sharply cut coat he bought at a charity shop. He also supplied the rings, which he had in his Stoneybatter house. Both men wore hats.

Mr O’Sullivan, who is divorced, has three adult children. It is Mr Murphy’s first marriage. The men, who have been good friends for almost 30 years – Mr O’Sullivan is now Mr Murphy’s carer – are both heterosexual. They have married to avoid paying inheritance tax should either of them die.

The marriage is “perfectly lawful”, as the former minister for justice and attorney general Michael McDowell told The Irish Times last Sunday.

During the wedding ceremony Mr O’Sullivan spoke of Mr Murphy’s never-ending kindness, mentioning one incident in particular, when he stopped to compliment a girl who was cleaning in a Dublin restaurant. “You’re doing a great job there,” he told her. It was a trait of Mr Murphy’s he always appreciated, this practice of encouraging people. Mr O’Sullivan said it reminded him of a line from a UK motivational speaker, Richard Wilkins: “Encouragement does to people what hot air does to a balloon. It lifts them.”

Mr Murphy sang Willie Nelson’s Let the World Go By, a song about friendship: “With someone like you, a pal good and true / I’d like to leave it all behind and go and find / A place that’s known to God alone . . .”

“I love Matt and he loves me, as friends,” Mr O’Sullivan told The Irish Times after the ceremony.

Their story came to light last week when Mr Murphy rang Liveline, Joe Duffy’s daily phone-in programme on RTÉ Radio 1. He was fed up listening to all the negativity and wanted to praise the Mater hospital, where he has been well cared for in recent years. But, he also told Duffy, “I want to let you in on a little secret: I’m 85, and I’m planning to get married on Friday to avoid tax.”

They had planned to marry in Cashel, Mr Murphy’s hometown, but the humanist solemniser was concerned about the legality of such a wedding, and withdrew. So they rang the register office. “You want to get married next Friday! Are you serious? People make appointments here months in advance,” they were told. Later in the week they got a call back to say a slot was available at 1pm.

So along they went, two grooms, two witnesses and a harpist – because someone at the register office suggested they might like to have some music.

Both men had worked at Eircom, Mr Murphy as a telephonist and Mr O’Sullivan – who is now an actor – as a computer technician. The bank took his apartment during the recession, and for a time he stayed with another friend, Paul Redmond, before Mr Murphy, who had lived on his own for 50 years, asked him to move in, as his health and sight were failing.

Mr O’Sullivan has performed as James Connolly in the Eugene McCabe play Pull Down a Horseman, a two-hander with Declan Brennan as Patrick Pearse. In February of last year they performed it in the state rooms at Áras an Uachtaráin before President Michael D Higgins, Sabina Higgins, Eugene McCabe and his wife, Margot. “There was a fantastic discussion afterwards,” Mr O’Sullivan said.

He is off to London this evening to visit relatives for Christmas but has arranged for Mr Murphy to be well looked after until he returns, early in 2018.

Traumatised woman must remain a ward of court 17:47
Young homeless mother may have been dead in tent for a number of days 17:41
Man jailed for five years for killing 7ft 5in Belarusian man 17:00
Boy not screened for hip problem at birth settles action for €120,000 16:21
Second-level teachers vote for industrial action over school safety and pay 16:10