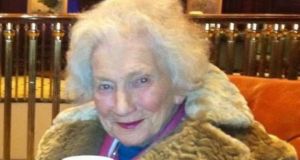 She is survived by her four children: Michael Foley, Donal Foley, Siobhán Fitzgerald and Deirdre Morrissey. A fifth child, Brendan, who had muscular dystrophy, predeceased her.

Last night, Michael Foley paid tribute to his mother and said she was a lifelong supporter of the Labour Party and follower of left-wing politics.

“She was a formidable woman and mother who we will all sadly miss. She was involved in fundraising for the Central Remedial Clinic because my brother passed away from his illness when he was young.”

Ms Foley was born in London in 1920 to Irish parents who were involved in the republican movement. She met her husband in London and they later moved to Ireland. Mr Foley died in 1981.

“She joked that she would be annoyed that she wouldn’t make it to 100 years of age because she dreamed of getting a birthday card from President Michael D Higgins,” said Michael Foley.