Campaigners warn against complacency and urge May referendum on Eighth Amendment 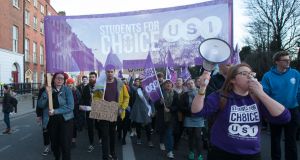 Pro-choice abortion campaigners have urged supporters not to be complacent as thousands marched in Dublin city this evening.

Demonstrators took up the length of O’Connell Street - on a march from the Garden of Remembrance to the Custom House - and chanted “our bodies, our choice” and “get your rosaries off our ovaries”.

Solidarity TD Ruth Coppinger told the crowd: “We can win this but we can’t take anything for granted.”

In order “to compete with the huge billboards that are being bankrolled from abroad”, she said “we have to go out into schools, into colleges, into workplaces and talk to people and convince them that we have to recognise the reality and that ten women a day are going abroad and women in their own bedrooms here are availing of abortion anyway.”

“It is exciting but terrifying as now the real work for pro-choice campaigners begins and there is a lot of education to get out there,” she said.

“We cannot delay any longer; every single day women are being put at risk. Some people are fearful as they have never discussed abortion before so a lot of chats are going to have to happen.

“The abortion debate is not confined to Dublin, she said. “Older women and rural women have been keeping secrets for a very long time and they have faced more hardships when it comes to travelling for an abortion.

“Reaching men is something we need to do. While we have many allies, we have this strange disconnect where some men are saying this is about women’s bodies so I won’t interfere or vote.

“I would appeal for men to vote and also have their say. Men are affected by this too as fathers, partners, friends – I want them to add their votes and their voices.”

The Union of Students in Ireland (USI) has said it feared that a delay in voting on the wording of the referendum this week would see the referendum pushed to June.

USI president Michael Kerrigan said young people have not had the opportunity to vote on this issue.

“Arguably it affects our future generations more than any other. UK Department of Health statistics show that over a quarter of those giving Irish addresses with their services are women between 18 and 24 years of age. Because of the reality of the Eighth Amendment, no students’ union has indicated that they wish to campaign to keep the Eighth Amendment,” said Ms Kerrigan.

The USI also raised concern about the thousands of students who were encouraged to seek J1 visas and would not be in the country to vote if it took place later than May, and the thousands who were away from their family homes or on work placement as part of their college curriculum.

After the event, anti-abortion campaign Save the 8th issued a statement which said: “Tonight’s march featured Communists for Choice, left-wing feminists for choice, and taxpayer funded lobby groups for choice. Notably, it did not feature very many ordinary voters for choice. From the beginning, repeal has been the agenda of a tiny, taxpayer-funded group of activists. Tonight we have seen just how big they are.