Focus on autism: ‘Riley has been rejected by 37 schools’ 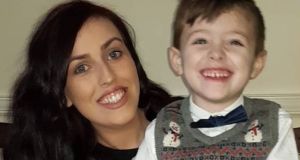 Nicole Duggan and her son Riley: ‘He’s the funniest person I know. He’s obsessed with Supervalu’

He’s now 5½. She is still searching for a school that is willing to take him.

“Most parents have the excitement of their children starting primary school in September; attending open days; planning where to pick them up,” says Nicole, who lives in Glanmire, Co Cork. “But due to a diagnosis, this country is letting my child and other autistic children down.”

Riley was diagnosed with autism at two years and nine months. He is non-verbal, has sensory issues and is still not toilet-trained.

A multi-disciplinary HSE team says he needs a placement in an autism class – sometimes called an ASD unit – which is typically attached to a mainstream school.

They offer more specialised intervention in a class of six students with a teacher, supported by special-needs assistants.

Nicole, a single mother, has spent almost two years calling schools, special education support services and TDs in the hope of getting a positive answer.

“Although his name has been put down for units all over Cork, no places are available. I have been in contact with 37 units in our county, who have ASD units. Out of those 37 units, there is not one place available for next year,” she says.

“This is the case for so many children all over the country. We spend our days ringing schools.”

The Department of Education has offered to pay for 20 hours of home tuition a week if she cannot find a school place.

“This country thinks it is acceptable to remove our kids from a school setting and have them schooled at home, due to ‘lack of resources’,” she says.

“Our children, who thrive on routine, are forced to be moved from pillar to post and are not a priority to our Government.

She says it would not be acceptable if neuro-typical children were told they did not have a school place. She says Riley has huge potential.

“He understands everything you say. He’s the funniest person I know. He’s obsessed with Supervalu … He loves music and singing, though he can’t talk … He’s an absolute whizz on computers.