Trinity society says hazing reports ‘not to be taken too seriously’ 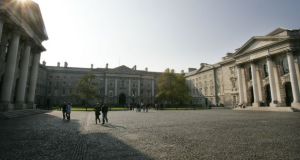 Amid hazing allegations, the Knights of the Campanile has defended practices in the club, following ‘misleading’ reporting. Photograph: Alan Betson/File photo

The all-male society in Trinity College Dublin (TCD) at the centre of a controversy over hazing allegations has defended practices in the club, following “misleading” reporting, the group has said.

In a statement, the Knights of the Campanile said media reports on an initiation ceremony that took place for new members “are not to be taken too seriously”.

TCD is investigating if any alleged hazing occurred at the initiation, which recently took place in the student residence of the society’s president, Ben Arrowsmith, and was first reported by the University Times (UT) last month.

Peter Ledbetter, master of the near-century old society, said he had been assured that “bullying and/or humiliation played no part” in the evening.

A member of the Knights of the Campanile present in the apartment at the time told The Irish Times that new members had been told to eat butter, and at another point had to get into a running shower with an umbrella.

The invite-only society accepts 50 new inductees each year based on their sporting prowess, and boasts 1,200 members, including honorary members.

Trinity society the Knights of the Campanile release a full statement for the first time on the allegations of the group ‘hazing’ new members pic.twitter.com/5DSHuQ36Yn

The statement from Mr Ledbetter, a prominent business figure and former Trinity tennis player, said media reports had been “somewhat misleading and improper”.

“The Knights are described as a ‘secret society’ which, very obviously is not true. Woodward and Bernstein would, I’m certain, have uncovered our society’s website within minutes,” he said.

There was a implication of gender bias in descriptions of the club as all-male, which was “misleading journalism,” he said. Journalists “should be aware the Knights have a sister college society in the all-female Heraens,” the statement said. However, it is understood this society, for women involved in college sports, has been dormant for several years.

Descriptions of the Knights as an elitist group were also unfair, Mr Ledbetter said. “Knights are an elite in the same sense that scholars can be described as an elite. Both are appellations earned through excellence,” the statement said.

TCD is also investigating an allegation that the UT “bugged” the apartment of Mr Arrowsmith during the alleged hazing. Reporters from the newspaper covertly placed a recording device by the open door of the apartment.

Mr Ledbetter said the actions of the UT involved “trespass, invasion of privacy, and bugging,” and had “disturbing implications for the privacy rights of all students”.

Following the story, more than 500 students signed a petition which has led to a referendum being announced, which could lead to the effective closure of the newspaper, by dramatically reducing the funding it receives from TCD students’ union.

The Knights of the Campanile had no role in the petition to slash the newspaper’s funding, Mr Ledbetter said.

“Some have sought to represent this petition as an attack on ‘freedom of the press’ but my understanding is that it actually arose from disquiet with the University Times’ trespass, invasion of privacy, and bugging,” he said.

Editor of the UT, Eleanor O’Mahony has rejected accusations of bugging, and the National Union of Journalists has defended the reporting as “consistent with the highest professional standards of public interest, investigative journalism”.