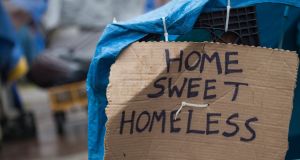 “The risk of homelessness becomes real once the emergency period ends.” Photograph: Reuters

Housing charity Threshold has warned of a “swell” in tenants facing eviction notices after the coronavirus crisis on the back of mounting rent arrears.

The charity said that if rent supplements were not provided quickly and efficiently there was a risk of rent arrears accruing and “the risk of homelessness becomes real once the emergency period ends”.

Minister for Housing Eoghan Murphy said the Government has commissioned an ESRI report on rent arrears which would “guide further decisions that may need to be made”.

“Some of those who were laid off first in the crisis will not be able to recover any rent arrears that they will have built up over the period, and we do not want to push a problem of a notice to quit, or something else, further down the line as that will not help them get on their feet,” Mr Murphy told the Dáil last Thursday.

The Government passed emergency legislation on March 27th to prevent rent increases and evictions for a three-month period up to the end of June.

People who have lost their jobs due to coronavirus and can no longer afford their rent can avail of the pandemic unemployment scheme, seek a rent reduction from their landlord or apply for a rent supplement or housing assistance payment.

Threshold said if these housing supports were provided without delay then “rent arrears do not have to accrue to unmanageable levels”.

However, if landlords refuse to reduce rent, if rent supplement applications are not processed efficiently or if HAP tenants’ differential rent (the remainder of the rent which the tenant must pay after receiving the State payment) is not revised the charity fears there could be a “swell in termination notices for rent arrears” once the emergency period ends.

Sinn Féin’s housing spokesman Eoin Ó Broin said “not enough is being done” to promote the rent supplement scheme, and as a result many people may not be aware they qualify for it.

The rent supplement scheme provides short-term support to people who at the beginning of their tenancy could afford their rent but due to a substantial change in their circumstances can no longer afford it.

In response to a parliamentary question from Mr Ó Broin, Minister for Social Protection Regina Doherty said out of a total of 18,200 people in receipt of the rent supplement, some 3,000 of them had been approved since March 14th.

Ms Doherty said the application process had been streamlined, with the form now five pages instead of 22 and additional staff assigned to deal with the increased demand.

She acknowledged some claims could be “complex or unclear”, and “delays can occur where additional information is required”.

Mr Ó Broin proposes establishing a rent arrears mediation process after the crisis ends, where an independent adjudicator would decide what happens to any rental debt.