Explainer: Did the Taoiseach ignore public health rules by going on a picnic?

People were urged last week not to have picnics. This week’s advice is: ‘use your head’ 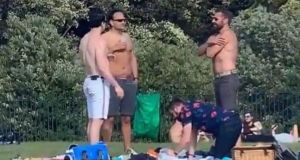 Was the Taoiseach disobeying the public health guidance on social distance?
His spokesman said Varadkar was fully complying with the guidelines on coronavirus.

What is the guidance?
Since the first wave of restrictions were lifted on May 18th, up to four people not living in the same household can meet outdoors so long as they remain within 5km of where they are living and obey social distancing rules of keeping 2m apart.

Was the Taoiseach following this?
Varadkar is currently living in the Steward’s Lodge on the State-owned Farmleigh Estate with his partner so the location of where he was picnicking in Phoenix Park, next to the Wellington Monument, was within this 5km limit. The video showed the Taoiseach appearing to keep some distance from his two friends who are not living in his household.

What is the guidance on picnics?
Last week the Taoiseach’s department urged people not to have picnics in parks or at beaches that were being reopened in the first wave of relaxations. Liz Canavan, assistant secretary at the Department of the Taoiseach, said: “If you are visiting a public amenity, try not to stay too long at the site or have picnics. Please do your exercise and then go home.” Asked this week whether it was okay for people to have picnics, Canavan said that the Government was “not madly encouraging people” to take up “a lot of space and time in amenities where they are cramped”. She said that the advice was guidance. “We’re asking people to use their head,” she said.

Have public health experts offered a view on whether Mr Varadkar violated guidance?
Asked about this on Monday, the State’s chief medical officer Dr Tony Holohan referred to the restrictions lifted last week that allows up to four persons not from the same household to meet outdoors while observing strict social distancing. “I didn’t see any pictures that are in violation of that involving the Taoiseach,” he said. Infectious diseases expert Dr Sam McConkey said that the Taoiseach did not breach any coronavirus guidelines: “As long as it’s within 5km of where you live, then you’re still within the rules so sitting on the grass outside in the sun is fine.”