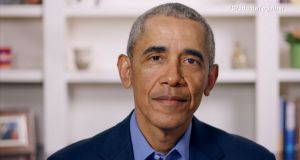 Barack Obama: “Let’s be honest, a disease like this just spotlights the underlying inequalities and extra burdens that black communities have historically had to deal with”.

While tomorrow’s feast is about Jesus’s return to the Father, it throws a great light on the Triune God. God is about community, the Father, Son and Holy Spirit. Apologies for the sexist language, but everything we say about God is said in human language, said analogically, and also said in a language couched in history.

But I think it’s fair to say that it points us to an understanding of the importance of community, our interrelatedness with one another.

Last Sunday at the Dominican Priory in Tallaght, Fr Donagh O’Shea in his sermon mentioned that people who experienced the London Blitz, later spoke about it in nostalgic terms. He said that during that time Londoners learned to realise how important fellowship and solidarity were to survive. Years later they came to realise how they missed that fellowship. And so too in the time of Covid-19 we are realising our dependence on one another. We are also realising our own fragility.

We are being made aware of how easy it is to lose ourselves chasing rainbows, which of their nature are transient.

Over these last weeks I have heard some people say that Covid-19 is a great leveller. It is anything but.

It was heartening last Sunday to hear former president Mary Robinson talk on Miriam O’Callaghan’s RTÉ programme about how Covid-19 is pushing us to be more empathetic and compassionate towards our neighbour. But she stressed that it is also exacerbating the inequalities that exist in our own society and across the world. She went on to say that it is making more visible the interconnectedness of poverty, and migration. She said that here in Ireland the plight of refugees and migrant workers is worse because of Covid-19.

“We have an unequal world. We don’t want to go back to business as normal,” she said.

And just some few hours earlier, former US president Barack Obama said during an online commencement address to graduate students of historically black colleges and universities: “Let’s be honest, a disease like this just spotlights the underlying inequalities and extra burdens that black communities have historically had to deal with in this country.”

The God story is centred on community. It’s a story of love and respect. It is reached in its sublime perfection in God. It is our privilege and obligation to work on it, to shadow it here in this world. And I’m inclined to say that if we are not involved in that, so many other aspects, that seem part of Christian living, are some sort of a game, an exercise in fake carry-on, in other words a sham. And it happens ever so easily.

Before Jesus ascends into heaven he tells his disciples to observe all that he has told them. He also gives them great assurance when he tells them that God will be with them and their descendants till the end of time. And that too is interesting. How often are we inclined to think that God has left us. Again, by saying that we are giving ourselves an importance that we simply don’t have. Is it odd for me to say that I learned so much about the feast of the Ascension by reading and listening to the words of Mary Robinson and Barack Obama? And there is a story in that too.