‘Ibiza of the Alps’ ski resort blamed for spread of coronavirus 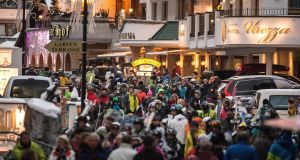 Skiing tourists in Ischgl, Austria, in 2013. Every year Ischgl, 1,400m up in the Tyrolean alps, is transformed from a sleepy village of 1,500 souls into a hopping winter sport paradise. Photograph: EPA

Austrian chancellor Sebastian Kurz has been praised for swift and decisive action in the coronavirus crisis, but a popular Alpine resort is being blamed for spreading the disease across northern Europe.

Every year Ischgl, 1,400 metres up in the Tyrolean alps, is transformed from a sleepy village of 1,500 souls into a hopping winter sport paradise.

Now Nordic health authorities and Germany have noticed a spike in coronavirus cases from people returning from the “Ibiza of the Alps”.

About 40 per cent of Norway’s 1,400 coronavirus cases to date have been linked to Ischgl. In Sweden the number of Ischgl infections has topped 1,000.

On a return flight to Reykjavik earlier this month, 14 of 15 passengers tested had the virus, also known as Covid-19. Danish media say 130 nationals brought coronavirus home from Tyrol. Authorities in southwestern Germany are hunting for 200 people who were on bus trips to the village.

“The outbreak we have at the moment has a lot to do with people returning from skiing holidays,” said Jens Spahn, Germany’s federal health minister. Anyone returning from Austria’s Tyrol region and South Tyrol in Italy, he said, should self-isolate for two weeks.

In Germany, a number of journalists who headed to Ischgl in early March have been infected.

Christof Lang, a journalist with German broadcaster RTL, visited the village in a group of six – half are now infected.

“The party machine in Ischgl continued at full throttle long after one should have been warned,” he said. “The scandal is that they had indications a week before we arrived that there could have been infections and they ignored them.”

“We partied in very tight spaces and of course we cracked a few coronavirus jokes,” he wrote.

The Austrian media has accused Ischgl business owners of wilfully spreading the virus by prioritising tourism takings over public health.

“Greed took precedence over the responsibility for the health of the community and guests,” suggested Austria’s Der Standard daily.

Ischgl officials have bristled at such accusations, insisting they have adhered to Austrian public health warnings.

Fears over skiers returning from Austria have not dampened the mood in Swedish winter resorts, bustling in recent days with holidaymakers.

Alarmed, officials in the ski region of Jämtland Härjedalen have asked Stockholm to tighten up restrictions – or risk a second Ischgl-style epidemic.

“We have to stop the flood of tourists,” said Sofia Leje, a medical professional in Jämtland county. “It is important we learn from the experiences in other ski resorts in Europe where infection spread.”

Across the border in Norway, authorities have adopted a stricter approach. Norwegians have been banned from visiting mountain huts in case they require medical assistance while there.

On Thursday, figures from John Hopkins University showed 1,439 cases in Sweden and 1,746 in Norway with 11 and seven deaths respectively.