The coming weeks could see the Cabinet use dramatic enforcement powers 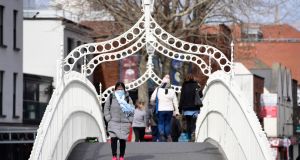 The State could activate powers to detain and isolate people suspected of having coronavirus on public health grounds. Photograph: Aidan Crawley/EPA

The decision to ask schools, pubs and clubs to close was just the first in a series of changes that will have to be made as Ireland faces into its first full week of major restrictions because of the coronavirus pandemic.

The Cabinet committee on Covid-19 met on Monday afternoon and discussed the Government’s plan for the coming weeks across different sectors.

Despite calls from the CEO of the Restaurants Association of Ireland, Adrian Cummins, to do so, the Government decided against instructing all restaurants to close.

Mr Cummins said it was inevitable that this would eventually have to be done but it was also imperative that it was done before St Patrick’s Day.

What is now more likely to happen in the short term is that smaller restaurants which cannot adhere to social distancing guidelines will have no choice but to close.

Some restaurants may switch to collection or delivery only.

Mindful of this, the Government is looking to give itself more powers to enforce extraordinary measures if needed.

Minister for Health Simon Harris has also said that the Government is considering activating a set of laws which previously have not been used.

Further regulations can be added to the 1948 infectious diseases regulations by the Minister for Health of the day, and these are contained in a “second schedule” which can be applied, if needed, to that legislation.

These provisions, which can be activated in order to prevent the spread of infectious diseases, include the following: the requiring of adults to remain in their homes or for parents to keep their children at home; requiring people to stay away from a specified place; restrictions on the holding of wakes and also precautions against the spread of infectious disease from vessels or aircraft coming into or leaving the State or from passengers or crews of such vessels or aircraft.

In aviation there will be severe restrictions on flights in and out of the country.

As of Monday night travel advice was simplified to advise all Irish residents against any non-essential travel overseas, and those who arrive at Irish airports will now be asked to restrict their movements for two weeks. So Irish airports will suddenly become very quiet.

Furthermore, Ryanair said it expects to ground the majority of its aircraft fleet across Europe over the next seven to 10 day,s with a reduction of 80 per cent or more in flights in April and May.

The company pointed out that over the past seven days, Italy, Malta, Hungary, Czech Republic, Slovakia, Austria, Greece, Morocco, Spain, Portugal, Denmark, Poland, Norway and Cyprus had all imposed flight bans of varying degrees from all flights to/from the country, or banned flights to/from countries with high risk of Covid-19.

The face of healthcare is also likely to look very different over the coming days too, with more GPs moving to online consultations and consultations over the phone, especially in light of increased pressure on their services because of coronavirus testing.

The purpose and use of several buildings may change. Hotels may be used to treat patients.

Mr Harris said that as the HSE assesses its capacity to deal with an influx of seriously ill patients, offers have come in from hotels and other private healthcare facilities for the use of their space.

Fianna Fáil leader Micheál Martin said on Monday that he has also suggested that chemotherapy patients be treated outside normal hospital settings.

On our main shopping streets, hairdressers and gyms will be closed.

As ever, the message from the Government as we move into the next phase will be that while the health service can potentially save the lives of hundreds of sick people, the public can save the lives of thousands by adhering to instructions on gatherings, parties, respiratory etiquette and social distancing.

1 Ireland in precarious position as third Covid-19 wave could be more deadly, Nphet warns
2 Covid crisis: Republic moves back to level 3 as shops open from Tuesday
3 Ex-barrister Patrick Russell conned people out of more than €12m, gardaí say
4 Hotels, retail, hairdressers, churches, gyms to open next Tuesday, followed by restaurants and gastropubs on Friday
5 Miriam Lord: Helen McEntee holds up well for someone with barely a leg to stand on
Real news has value SUBSCRIBE