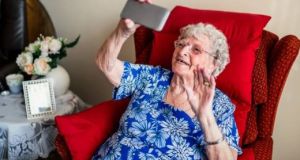 “I think one of the things that the Irish State gave support to later in life such as free travel, TV licences, telephone, those sort of things, could extend to digital communication.” File photograph: Getty

Experts in geriatric health have called for a State subsidy and provisions to close the “digital divide” among older people after a UK study found frequent internet use can improve mental health.

The study, carried out by researchers in the University College London, and published in the Journal of Medical Internet Research, found links between more frequent internet use and increases in wellbeing in older adults, particularly those who are wealthy and more educated.

Those who used the internet daily also had a lower average depression score of 1.02, compared to 1.76 for those who had never used the internet, measured on a scale from 0 to 8, where 0 represents no depressive symptoms.

However, the impact on mental wellbeing was found to vary by internet use type, with people using the internet for communication being more likely to report lower levels of depression and better life satisfaction than those who did not.

Desmond O’Neill, a consultant geriatrician, said the results were “contaminated” by the influence of socio-economic factors.

“It raises issues about equality, about resources, about getting user-friendly tablets and wifi set up. It does suggest that there is a market for older people to get access, perhaps a subsidy,” he said.

“I think one of the things that the Irish State gave support to later in life such as free travel, TV licences, telephone, those sort of things, could extend to digital communication.”

A recent report by The Irish Longitudinal Study on Ageing (Tilda) found that about 71 per cent of people over 50 have access to the internet in their homes.

However, some 30 per cent of adults over 50 who live alone did not have access to the internet, the study found.

“We need to encourage use, but also to enable use, such that people are constantly updated on how to use it. It has to be a multi-pronged approach. Facilitating access through subsidy is one solution but you have to have systems in place,” Prof Kenny said.

Age Action, a charity for older people, called for learner-led one-on-one tuition supports for older people to improve their digital literacy skills, while Sage Advocacy, another charity, said this highlights the need for high-speed broadband to be rolled out nationwide.

Sean Moynihan, chief executive of Alone, added that Covid-19 has showed that older people are willing to engage with the internet if they are provided with the correct tools.

“There was so many negatives about the pandemic for older people, but one of the big outcomes is this engagement. I think the genie is out of the bottle now that older people have the most to gain from the internet,” he added.