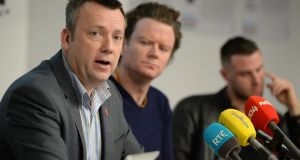 A second action alleging defamation has been initiated arising from the Home Sweet Home occupation of Dublin’s Apollo House last winter, an initiative aimed at highlighting the homeless crisis.

RTÉ’s Dublin Correspondent John Kilraine has begun legal action against Brendan Ogle of the Unite trade union who questioned RTÉ’s and Mr Kilraine’s coverage of the occupation in a lengthy Facebook post.

John Kilraine, named in the post, was subsequently defended by both RTÉ and the National Union of Journalists. His legal action against Mr Ogle is being taken in a personal capacity. RTÉ is not a party to it and would not comment on the matter last night.

In a Facebook post on Saturday night Mr Ogle said he would “not be forced into supplication by RTÉ, or Mr Kilraine, and I will continue to defend the disadvantaged in our country as I have done for decades”.

He said: “This time last year (exactly) RTÉ ran a story which was defamatory of me, linked to my involvement in Apollo House. I subsequently entered defamation proceedings against the station. I wrote a Facebook post, pursuant to my obligation to defend myself, in the context of my activism and the reportage of same. I stand over every word of it.”

He said: “I have come under some pressure to drop the legal action to clear my name and I have refused to do so – justice should not just be for privileged elites, the establishment and the monied classes – but in this regard solicitors for John Kilraine have issued intimidatory legal proceedings against me in recent days because of that FB (Facebook) post, and related private two-way communications.”

Noting that there would be reports in Sunday’s papers on these matters he said: “I will represent myself against these forces without succumbing to such bullying and intimidation.”

Mr Ogle issued defamation proceedings against RTÉ last year over a report it carried that his trade union, Unite, sought an exemption from providing social housing at a property it owned in Dublin city centre.

The broadcaster reported on January 16th, 2017, that the trade union had sought a social housing exemption certificate from Dublin City Council when it was carrying out work on its former head office on Merrion Street in Dublin.

The application was made by property managers acting on behalf of Unite who were seeking planning permission to convert the protected Georgian building, which had been in office use, back to residential use.

At the time the report was aired, Unite was involved in the Home Sweet Home occupation of Apollo House, a campaign co-founded by Mr Ogle, Unite’s education officer.

After the RTÉ broadcast, Unite regional secretary Jimmy Kelly said the union had offered the building to a number of organisations for social housing three years ago. However, the groups did not consider the building suitable.

He said one of the organisations, Focus Ireland, came to the conclusion that the Merrion Square building was “completely unsuitable” for their needs as it stood. Focus Ireland confirmed the offer.

Meanwhile RTÉ stood over its report and its coverage of the occupation of Apollo House, saying it was satisfied it had been fair and accurate.