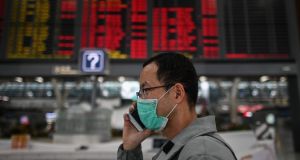 People from more than 110 countries require visas to travel to Ireland; including India, China, Pakistan, Russia, Syria and the Philippines. Photograph:Getty

Foreign nationals from outside the European Economic Area (EEA) who were planning to move to Ireland will be unable to secure a visa to enter the country for the foreseeable future, the Department of Justice has said.

In a statement posted on the Irish Naturalisation and Immigration Service (INIS) website on Saturday, the department announced it would “temporarily cease accepting new visa applications” in response to the coronavirus pandemic.

Certain priority and emergency cases will continue to be processed including visas for healthcare professionals, health researchers, elderly care professionals and immediate family members of Irish citizens, said the department. However, most new visa applications will not be accepted.

“Increasing travel restrictions and the measures introduced as part of the Government’s efforts to interrupt the transmission of Covid-19 means that travel may not be possible and even if possible, is not advisable unless essential,” said the public post. “The situation will continue to be reviewed in consultation with the relevant authorities in the coming days.”

While applications submitted before the coronavirus outbreak will be processed, “only a very limited number of visas will issue following completion of the process” given the current difficulty in accessing flights and international advice on limiting travel, said a department spokesman.

He said successful applicants would be told their visa was available when restrictions are lifted but did not indicate when this might happen.

“It should be noted that a majority of other European Union member states have stopped processing visas,” he told The Irish Times.

“In addition our embassy, honorary consuls and commercial visa application centre partners face closures which will greatly limit access to our visa services worldwide in addition to travel restrictions and lockdowns which are increasing by the hour.”

Any person who does arrive into Ireland during this pandemic will face a minimum 14 days of self-quarantine which will “limit their availability to employers”, he said.

“We are in a position to process visas for critical cases and, when the situation returns to normal, to promptly resume regular business.”

More than 110 countries are listed on the INIS website as requiring visas to travel to Ireland, including India, China, Pakistan, Russia, Syria and the Philippines.

The Department of Justice announced last week that foreign nationals with visas due to expire in the coming weeks would be able to remain in Ireland until at least May 20th under a temporary extension programme.

The INIS office on Dublin’s Burgh Quay has also closed as part of range of measures being taken in response to the Covid-19 pandemic.