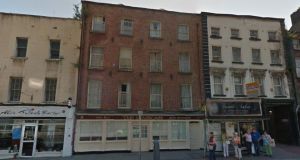 Number 21 Aungier Street in Dublin, believed to date from 1667, which the Peter McVerry Trust had planned to use to accommodate homeless adults. Image: Google Maps

Work to convert one of Dublin city’s oldest buildings into a homeless hostel has been stopped following the intervention of the Department of Arts, Heritage and the Gaeltacht.

The Peter McVerry Trust had planned to use 21 Aungier Street, believed to date from 1667, to accommodate homeless adults.

The building is a protected structure and a registered historic monument, with any work requiring the consent of the Minister of Arts, Heritage and the Gaeltacht. The trust had not received this consent before starting work on the building.

Work to reconfigure the house started last month. The Dublin Civic Trust, which restored the building in the 1990s, when it had been derelict and under threat of demolition, had objected to the development which it said could compromise its historic fabric.

“We met with the relevant people from the department of arts and heritage national monument section on site on Monday, and the work has stopped.”

The charity had not given the required two-month notice period to the department before beginning work, Mr Doyle said.

“We understand that we have obligations under the national monuments legislation, but I am very confident that we in no way damaged the building.”

Mr Doyle said he saw no reason that historic buildings could not be used for homeless accommodation. “If I could use the Áras, I would.”

Assistant Dublin city manager Brendan Kenny said the building would not be used as a homeless hostel.

“Peter McVerry Trust has withdrawn from the project and it is not going to progress. We will be looking now at other options for homeless accommodation throughout the city.”

The failure to seek ministerial consent had been a mistake, Mr Kenny said. “Projects are moving very fast . It was just an error not to give the two months’ notice.”

Independent councillor Mannix Flynn said the council had failed in its duty to protect the building. “This is a very damaging and unfortunate scenario for Dublin City Council and for the Peter McVerry Trust. Leaving aside the issue of homelessness, nobody is above the law.”

Aungier Street was laid out in 1661, more than 10 years before St Stephen’s Green, as a residential street for the elite. Chosen for its proximity to Dublin Castle, it gave rise to a new type of house, the “city mansion”.

These houses were the grandest in pre-Georgian Dublin and provided the template for later buildings such as the Mansion House.

Taoiseach dramatically sacks Barry Cowen as minister over drink-driving controversy 08:25
Cowen ‘surprised and disappointed’ after being sacked on the phone by Micheál Martin 07:46
Covid-19: Overseas visitors are causing ‘stress and anxiety’ in some areas, TDs say 05:10
Three visitors investigated by Garda after refusing to fill in locator form 04:45
Irish peacekeeping veterans sue the State over ambush of convoy in Syria 03:01

1 Taoiseach dramatically sacks Barry Cowen as minister over drink-driving controversy
2 Miriam Lord: What the actual...? Martin blooded as Taoiseach after he wields axe on Cowen
3 Covid-19: Ireland likely faces ‘imminent second wave’ due to reopening, experts warn
4 Cowen ‘surprised and disappointed’ after being sacked on the phone by Micheál Martin
5 Chilean student ‘happy to be free’ after being detained for nearly two weeks in Mountjoy
Real news has value SUBSCRIBE