Newborn among 76 Syrians to arrive in Roscommon 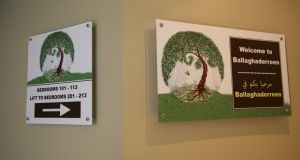 A sign inside the former Abbey Field Hotel in Ballaghaderreen, Roscommon, welcoming the 76 Syrian refugees who arrived there on Tuesday. Photograph: Brian Farrell

Hope was in the air when a group of displaced Syrians arrived in Ballaghaderreen in Co Roscommon on Tuesday, not least because the newest of the new arrivals was born in Dublin less than two weeks ago.

When the two buses carrying 76 men, women and children arrived at the former Abbeyfield Hotel at lunchtime, a small group of local people were waiting at the entrance to welcome them to the town.

The first contingent of Syrians to arrive in Roscommon includes 12-day-old Zena Alasora who was born in Dublin’s Rotunda Hospital on March 9th, and who was travelling with her parents and their two older children.

“She is just beautiful and everyone is making a big fuss of her. We actually have three babies – there are 30 children altogether,” said Jacqueline Mullen, manager of the Emergency Reception & Orientation Centre (EROC).

Staff reported that the newcomers seemed delighted with their new surroundings, which may not be surprising given that many of them have spent months under canvas in sometimes freezing conditions.

‘Little reception for them’

“We had a little reception for them when they arrived and then we gave them a tour of the building,” said Ms Mullen. “They have been taking photographs of everything, and have already been in contact with people at home, letting them know they are okay”.

Moroccan-born chef Ali Derazzi pulled out all the stops for the first meal, serving up a lunch of stuffed aubergines and lamb tagine.

But the most popular of the welcoming party as far as the children were concerned was the centre’s mascot , a stray cat called Rusty who was nursed back to health by staff after limping in a few months ago after apparently being run over by a car.

“The children are like all children. They are getting to know Rusty and they are surfing the net on the computers and they seem happy,” said Ms Mullen.

Health Service Executive and Department of Justice officials were on hand to ensure the transition went smoothly and the newly formed Friends of of the Centre (Ballaghaderreen), who will run a voluntary befriending service, dropped in to say hello.

One of the new arrivals, Mohammed (26), speaking through an interpreter, revealed that his parents still live in Aleppo. The former microbiology student spent a year in Greece, living for several months in a tent. Asked if he hoped to return to Aleppo he said “of course”.

The department has said that 4,000 refugees and asylum seekers fleeing war and conflict will be offered sanctuary in Ireland.

Two thousand are due to arrive this year and are being temporarily housed in three EROCs in Ballaghaderreen, Monasterevin and Dungarvan.