Charities reveal how every €1 donated is spent

Alone puts 100% towards services, while 64% in Irish Heart Foundation is spent on work

The Trocaire charity puts 91 cent of every €1 donated towards its charitable work. Photograph: Kim Haughton

If giving to charity was on your agenda over the festive season, you may wonder how much of your donation ended up going to your worthy cause.

It’s a valid question, says Lucy Masterson, chief executive with Fundraising Ireland. “Any charity worth its salt will quite happily say: ‘This is where the money goes,’” she says.

The Irish Times asked a number of charities to provide a breakdown of how much of every euro donated goes to the actual work of the charity and how much goes on governance (administration, etc) and fundraising costs.

The results reveal a broad range of practices.

For example, Alone, which helps elderly people in need living in Dublin, is run as a trust, which means that it can afford to put 100 per cent of all donations towards frontline services.

It funds governance, fundraising and administration activities from its returns on investment and rental income.

Oxfam Ireland typically puts 80 cent of each €1 donation towards its work easing poverty around the world. However, it will put 100 per cent of donations for emergency appeals, such as the ongoing crisis in Syria, to that specific appeal.

Concern, which works on fighting poverty, also performs strongly, and says it puts 91.1 cent of every €1 donated towards charitable works, keeping governance costs at just 0.5 per cent. So does Trócaire, another NGO, which also keeps the proportion of each donation that goes to charitable work north of 90 per cent.

A third on fundraising

Other charities don’t compare as well based on this metric. Just 66 cent of every €1 donated to the National Council for the Blind in Ireland goes straight to its work.

A third of each donation is spent on fundraising costs (much of these associated with its chain of charity shops). Costs at the Irish Heart Foundation eat away up to 36 cent of every €1 donated.

How much of my €1 goes on charity work? 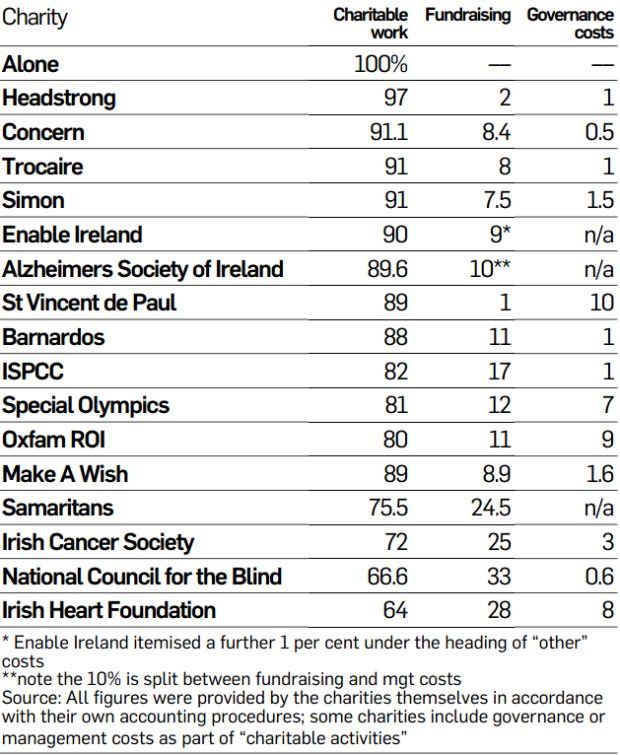 Earlier this month, the London-based True and Fair Foundation surveyed more than 5,000 UK charities. It found that one in five were spending less than 50 per cent of income on charitable work.

Gina Miller, founder of Truth and Fair, says she commissioned the research to help consumers determine the best place to put their money. She would like to see a minimum threshold of 65 per cent of all donations going on charitable works.

Masterson, however, says imposing a threshold might be a “blunt instrument”.

“It’s not about the number,” she says. “It’s about the return on investment you get for that.”

Indeed, while the table may be useful, there are a number of caveats to bear in mind when assessing the data.

Firstly, charities don’t always prepare this metric in the same way. As is pointed out on charity representative website Goodcharity.ie: “There is no standard approach to defining overhead, so when one charity claims to spend 2 per cent on administration costs and another states it spends 20 per cent, they are not necessarily talking about the same thing.”

Some charities include staff costs under “governance” while others will include such costs as part of their charitable work.

This can swell the stated amount spent on charitable work, as opposed to administration costs.

Secondly, fundraising costs are typically higher in organisations that benefit less from statutory/government and grant funding.

The Irish Heart Foundation, for example, receives just 7.5 per cent of its €5 million- plus income from State funding. And the ISPCC, which spends about 17 per cent of its budget on fundraising, says it receives a lower percentage of statutory funding for its work. So it must spend more on fundraising “to ensure ongoing provision of services”.

Contrast this with Trócaire, which receives 58 per cent of its funds from government and institutional funding, and spends just 8.4 per cent on fundraising.

Many charities turn to other, often more expensive forms of fundraising, such as direct marketing (which typically cost 42 cent of every euro), corporate donations (25 cent), and community fundraising (35 cent).

This is why many put so much effort into their teams of street campaigners hired to get people to sign up to regular donations. It is a cheaper method (at 15 cent per euro), and offers certainty for the charity.

Charities that run shops can also face higher fundraising costs. While the plethora of charity shops across the country can also be used to bring in much-needed funds, Masterson notes that they can be very expensive to run.

“Since when do charities have to run charity shops?” asks Miller. As far as she is concerned, it’s an unnecessary expense.

“My issue is slightly different,” she says. “Your role as a charity is to become as efficient as possible and to make sure that donations go to end causes.

“Charity shops can’t be the most efficient way to raise funds today. What about the internet?”

Diarmaid Ferriter: Would Seán Lemass have wanted a monument?

Investigation of Varadkar leak to continue into summer

1 Academic on €154,000 salary with no work to do accuses president of Maynooth

3 Beyond bitcoin: Blockchain will change finance, science and the world

Ireland’s property market: ‘We envy every generation that came before us’

Generation Covid: Are there short-term fixes to help young adults?