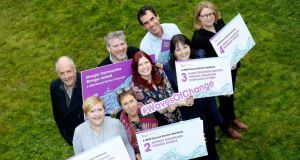 Election candidates should move beyond short-term political promises and commit to longer-term visions that would protect the futures of the next generation, a member of the national association of charities has said.

Speaking at the launch of the Wheel’s general election manifesto, Jill Brennan, chief executive of the Coeliac Society of Ireland, accused Irish politicians of moving too quickly into “re-election mode” after joining government and quickly losing sight of the many organisations who rely on their policy promises for improvements in Irish society.

“It’s about recognising that it’s not just the election cycle that matters. They should be thinking about the long-term benefits for society. Maybe they’re not going to be in power in five years’ time but think about it for your kids and the next generation.”

Ivan Cooper, public policy director with the Wheel, which represents 1,700 charities, said the coalition was calling for awareness from election candidates of the “increasingly precarious funding arrangements and demanding compliance requirements” facing the charitable sector.

“These compliance requirements – in the private sector they would call it red tape – that have developed in recent years mean many organisations are simply unable to cope with the new governance expectations. The expectations are right, we have no issue with them, but we need the State to recognise the demand this presenting on organisations.”

Politicians are not interested in hearing about the extra funding needed for administration and governance, said Mr Cooper. “But there’s a cost to doing things well and we’d be asking all State funders to make a contribution to the cost of those overheads.”

Jacquie Horan from Cope Galway agreed that while most funding should go directly to “front-line work”, additional support was needed to ensure quality standards can be met.

Election candidates must remember the key role the community and voluntary sector play in addressing some of the most challenging issues facing Irish society today, said Ms Horan.

“The Government are constantly looking for best-practice level of governance and accountability and these things are extremely important but they also cost money. You can’t expect that level of standard without being willing to cover the costs.”

The Wheel also called on election candidates to rethink the State’s relationship with charities so they are seen more as partners rather than service providers. It added that the voluntary sector currently provides about a quarter of acute hospital services and about two-thirds of services to people with disabilities.

The new government should move away from “risk-shifting contract dominated approaches” and towards more of a “risk-sharing model” to prioritise the best interests of individuals and families in receipt of support services, said Mr Cooper. Simple changes such as the introduction of multi-annual funding models of three to five years would also help build a stronger health service that could respond to those most in need, he said.