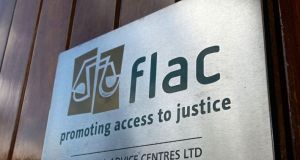 The number of calls about domestic violence to free legal advice centres (Flacs) increased by almost a quarter last year, while calls about workplace bullying increased by 36 per cent compared with 2018, the organisation’s annual report warns.

Published on Thursday, the report highlights high levels of discrimination against people from the Roma community, as well as a significant increase in calls about employment rights.

Flac saw a 9 per cent increase in calls to its helpline, to 12,469 last year. Of these 24.1 per cent related to family law, 13 per cent to queries about Flac’s service, 11.5 per cent about employment law, and 5 per cent to housing rights.

Of the 3,008 calls about family law, 41 per cent related to divorce or separation; 25 per cent were about custody, guardianship and access; 20 per cent concerned maintenance; and domestic violence and the family home accounted for 10 per cent.

“There was a 23 per cent increase in the number of domestic violence calls compared with the previous year,” says the report.

“There was a 36 per cent increase in the number of calls about bullying in the workplace, accounting for 9 per cent of all employment law queries.”

Queries about employment law, “rose by over 10 per cent compared [with 2018] and were the second most frequently discussed queries in the clinics in 2019”.

Flac had 112 open case files in 2019, and more than half concerned people from the Roma community who had made contact through Flac’s dedicated Roma clinic in Dublin.

“The cases we encounter . . . demonstrate the difficulties that members of the Roma community face in accessing healthcare, emergency accommodation and social housing, even after they have been established in in the State for considerable periods of time,” said Eilis Barry, Flac’s chief executive.

“This is particularly concerning where Roma families have no other form of income leaving them reliant on charity.”

The cases underlined, she said, “the over-rigid application of the habitual residence condition” whereby applicants for state supports must prove their long-term connection to the State.

Among her highlights was a case where a hotel was ordered to pay €5,000 to a Traveller family after it cancelled a booking to celebrate a first holy communion.

“Another significant outcome was the settlement of defamation, discrimination and personal injuries proceedings initiated against Dublin Bus on behalf of two Roma women who were ejected from a bus.”