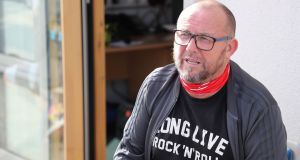 Tommy Coombes: ‘We are really hoping we get some statutory support.’ Photograph Nick Bradshaw/The Irish Times

A food bank in west Dublin that began from the back of a car at the start of the Covid-19 pandemic is now delivering 2.4 tonnes of groceries to more than 300 households weekly.

“We had been delivering food to people before the Covid, mainly older and more vulnerable people,” says Coombes. “But very quickly from March we were delivering to people we had never met before, especially families with children; and as far away as Balbriggan.”

The growth has been mainly through word-of-mouth, with people calling the CDP for help.

“If someone knocks we make sure they get something,” says community employment worker Antoinette O’Connor, who helps distribute food.

“I didn’t realise the struggles people have. The families, with husbands not working, or single mams. Kids weren’t getting their breakfast in school anymore, so cereal was a big thing, milk, yoghurts, beans – the essentials. It would break your heart.”

Among those helped was Áine Libreri (35), who has just graduated from Maynooth University. She lives on a boat she got a loan to buy after becoming homeless three years ago. Repayments consume much of her income, however, and she has no electricity or running water. With lockdown she was unable to shower at college or go to friends’ homes for water.

She had had a placement at the CDP and so knew Coombes. “Tommy got in touch when lockdown started to see if I was okay. Every couple of weeks he sends over beans, pasta . . . It just means I don’t have to choose between food and a bag of turf.”

“The food was very good. But it was more that Antoinette knocked at your door, the contact. I was lonely because I couldn’t go anywhere.”

Christine O’Connell (58) has an essential tremor, emphysema and has twice survived cancer.

“To get the food was a big help because you were afraid to go out, to go against the rules . . . I am very worried about the Covid . . . I am worried for everyone and what it means. I just pray every day.”

Patrick McLoughlin (57) who lives alone, and has mobility problems, says he “wouldn’t have made it” without the food deliveries as he could not call on family for help during Covid.

Most of the food is provided by Foodcloud which has seen “demand dramatically increase” since March. In June it noted the 164 charities with whom it worked had provided free food to more than 59,000 people in the preceding three months.

Of these 70 per cent experienced a surge in demand, with 49 per cent reporting an increase among older people; 36 per cent increases among single parents and 30 per cent among people with mental health problems.

Foodcloud had waived charges from May 1st but will be reintroducing its 50 cent per kilogram charge from October 1st to cover costs. It means a weekly bill of €1,200 for the People’s Foodbank in Bluebell, along with a monthly rent of €1,000 for its new storage facility.

“Realistically, we can’t afford that 2.4 tonnes of food a week in the long term,” says Coombes. “We are really hoping we get some statutory support. This crisis with Covid has exposed struggles and crises for people that in many ways were already there, beneath the surface. We could easily have walked away from those, but we wouldn’t because the State was not stepping in.”