‘It took me time to develop confidence ... but the Irish coming over now. They don’t feel alien’ 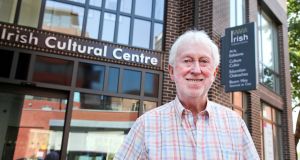 Jim O’Hara, chair of the Irish Cutural Centre in Hammersmith for 13 years. ‘During the 1970s and 80s it was a difficult time for the Irish community here in Britain. One felt self-conscious reading an Irish newspaper.’ Photograph: Joanne O’Brien

Walking around the bright and airy Irish Cultural Centre in Hammersmith, Jim O’Hara still holds the strong strains of the accent he brought with him in 1968 when he came to London from the Ardoyne in north Belfast.

“I wasn’t confident when I came, speaking with a Belfast accent during the Troubles. It took me time to develop confidence, whereas I don’t find that with the Irish coming over now. They don’t feel alien in England – they feel different but not in the sense that it’s an obstacle.”

O’Hara, who is chairman of the centre, has announced his retirement officially after 13 years of service, though he will remain on the board of directors, with Peter Power-Hynes taking over from him.

The centre’s Hammersmith home on Black’s Road in west London has served as a hub for Irish culture, arts and community since 1995, featuring contemporary musicians, literary events and Irish film and art exhibitions.

However, the original council-owned building – one visited by presidents Mary Robinson, Mary McAleese and Michael D Higgins – is no more, and for a time in the last decade it looked as if the centre would have to move out of Hammersmith.

O’Hara’s initial involvement with Black’s Road came in 2003, when he took his two British-born sons there for music classes. In 2007, Hammersmith and Fulham council said it wanted to turn it into a multicultural centre, not just one for the Irish.

“At that stage, people at the centre asked me to get involved, so I got in touch with the Irish government and made a proposal. I told them the centre was in danger of closing and losing its Irish identity,” O’Hara says.

The government offered an annual grant, while Hammersmith and Fulham gave a five-year lease. However, in 2012, the then-Conservative-controlled council, faced with Whitehall budget cuts, decided to sell.

It offered a first refusal to the centre, for £1.5 million. “This was a prime site in central London that we were buying. Initially we had no money, but they agreed as long as we paid up in nine months. Raising that money in 2012 was really hard during the height of austerity.”

Following a long battle, O’Hara, who had become chair in 2007, secured the £3.5 million that was needed to buy the building, demolish it and replace it with a new build in a novel co-operation with a local housing co-operative.

The centre closed in 2013, with activities moving for the duration to the nearby community centre in a Church of England-owned church. The new building opened in October 2017.

O’Hara remembers the pride felt on opening night: “It was a great feeling to walk in. It’s modern and it reflects the modern Ireland. The old centre was slightly dark and dreary, whereas this is bright and airy.”

In a House of Commons motion this week, MPs paid tribute to O’Hara for the “leadership, commitment and vision” he has shown and noted the role played by the Irish Cultural Centre “in championing culture, understanding and good relations between our islands”.

Spacious and elegantly decorated, the centre will keep the nucleus of Irish culture alive in London, says O’Hara. Not only that, it is independent and self-sufficient. “Most countries’ cultural institutions are heavily subsidised by their governments. We do get a grant from the Irish Government, which covers our cultural programme, but it doesn’t cover the cost of running the building and employing people. We raise all of that ourselves.

“What a tragedy it would be if Ireland didn’t have a cultural centre,” O’Hara says, “Having Riverdance on in the Hammersmith Apollo isn’t the same as having an actual institute in central London that showcases the best of Irish culture.”

O’Hara, who ended his working career as director of the Irish Studies Centre at St Mary’s University College in Twickenham, remembers a very different London when he arrived more than 50 years ago.

“During the 1970s and 80s it was a difficult time for the Irish community here in Britain. People tended to keep their heads down and kept a low profile. One felt self-conscious reading an Irish newspaper.”

The Hammersmith centre plays a part in encouraging a new generation of Irish in London to keep their culture alive, though younger Irish do not flock to Irish social spaces in the way their grandparents did.

“The older generation tended to stay closer together and sought security and comfort by being in their own culture, in their own pubs. The young Irish that come over don’t feel a need to go and engage with Irish culture. They don’t join organisations in the same way.”

Much of this is due to confidence and that they have integrated more easily into London life due to job security and affluence. However, the centre wants to target them, but also second- and third-generation Irish raised in Britain.

The Irish Government “will need to give help and sustain things like this Irish cultural centre”, says O’Hara, if it wants to ensure that a sense of Irishness survives, “or else that cultural connection will eventually dissipate”.

Such matters are particularly important in an era of Brexit. “Unfortunately, there is an ignorance in Britain amongst politicians about the damage this can do both to Northern Ireland and to Anglo-Irish relations.” He doesn’t think either Theresa May’s government or Boris Johnson’s governments have sufficiently taken that on board.

“Some of the British press have pushed the blame on to Ireland. That message of ‘if the Irish would only move’ is an insidious way of putting Ireland in the firing line. It’s nasty.”

While it is “unlikely” that political tensions surrounding Brexit will filter into everyday relations between England and Ireland, he says, “we shouldn’t get complacent” in dealing with bigotry.

“Racism can be easily whipped up by people. Once you’ve experienced it, you can see how it does develop. It can be whipped up if politicians think it’s within their interest to do so.”