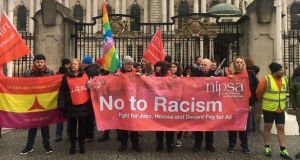 The demonstration heard that right-wing “poison” must not be allowed to hijack the yellow vest movement which has been ongoing in France for nearly three months. Photograph: Amanda Ferguson

A group styling itself The Yellow Vest Movement of Great Britain and Northern Ireland cancelled a planned demonstration outside Belfast City Hall at the weekend after left-wing, anti-racism activists organised a counter protest.

On Saturday, what had been described to police as a “pro-EU exit rally” by a “yellow vest group”, cancelled their demonstration. However, an anti-racism counter demonstration, organised by Yellow Vest Occupy Belfast, involving a couple of dozen people proceeded.

People Before Profit MLA Gerry Carroll, who was involved in a left-wing gilet jaunes inspired protest outside city hall last week, was also in attendance on Saturday.

He said right-wing “poison” must not be allowed to hijack the yellow vest movement which has been ongoing in France for nearly three months.

Weeks of anti-government street protests in France has included some violent episodes.

What is happening in France?

Protesters assembled by the Invalides esplanade near the Assemblee Nationale parliament and marched through the city’s Left Bank. The demonstrations were peaceful, although many shops had nevertheless shut in case of trouble.

A police source said there were some 5,000 protesters in Paris, some of whom gathered near the Champs Elysees, while there were similar demonstrations in major cities across France.

Some had also made coffin-type objects to denote the deaths of 10 people so far during the protests.

The protests began in November over higher fuel taxes. Those fuel taxes were subsequently scrapped, yet the movement has morphed into a broader anti-Macron protest.

December’s demonstrations wreaked some of the worst violence seen in decades in Paris, as rioters burned cars and damaged shops and businesses. Protests so far this month have not witnessed the same level of trouble, although video of a former French boxing champion punching and kicking police in Paris shocked many.

Macron has launched a series of national debates to help quell public discontent and restore his standing. – Reuters