As one of the fastest growing occupations in Ireland, there are some 44,000 people working in the senior care industry 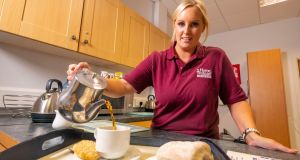 There are 44,000 people working as professional care workers or home carers in Ireland, making it one of the fastest growing occupations.

For the most part, they are an invisible army, helping to keep people in their homes for longer, providing care when families can’t, and easing the pressure on them at a difficult time.

It is 9am on a wet Friday and one of them – care-giver Joanne Smith – has arrived for her first call of the day, at a large, private home in Waterford city.

Her employer, Home Instead Senior Care Waterford, has provided care plans for each of the four clients she’ll visit until her shift ends at 2pm. “It’s very detailed,” she says. “Down to, if you’re looking for such-and-such, it’s in this room.”

But she doesn’t need the care plan to learn about her first client, Maura*. She has been helping to look after her for five days a week for the past six months. “She mightn’t get my name any more, but she’d still recognise me.”

Maura, who worked as a midwife and raised three boys, looked after her husband who had Alzheimer’s, until he had to go into a nursing home. He died in 2011. Now she needs that help herself, her family are determined to keep her at home. “It’s hard work on the family having a parent at home,” Smith says.

“It’s a team effort from the family, from carers, from everyone. I don’t think anyone could do it alone. There’s no place like home though, is there?”

Maura’s son, Brian, is making a cup of tea downstairs when we arrive, and Wilma Mundo, a private carer hired by the family to help out from Monday to Friday, is washing up.

Smith goes upstairs. “Have I to get up?” Maura asks. She wants to stay in bed. “I don’t have to have my hair washed, do I?”

Smith takes her to the bathroom, explaining what they’re doing as they go. With clients who have dementia, she says later, “It’s very important to explain what you’re doing as you do it. You don’t just presume anything.” She’ll always ask if it’s okay to apply some lotion to their back, or even boil the kettle.

Later, Maura introduces me to her Shih Tzu, Ellie, who is lying on the bed beside her. “My faithful companion.”

To talk to his mother, Brian says later, you might not know anything is wrong. But “her short-term memory is completely gone. She has no sense of time”.

The HSE pays for a carer for stints of 45 minutes twice a week, plus half an hour three times a week. “On Wednesday and Friday, we get 2½ hours of care in the afternoon. On Saturday, then, a carer comes from 12 to 5pm. She gets 45 minutes on a Sunday morning. It’s very bitty. We’ve had to fight for everything,” he says.

Brian has a spinal chord injury, which means he is limited in what he can do. Mundo stays overnight, and a nephew stays during the week. What would happen if you weren’t able to pay for additional care hours? “She’d have to go into a home,” he says. But she needs to be here, with “her own bed. Her dog. The dog is everything to her.”

There’s a short gap for Smith between Maura and her next client, who lives just a few minutes’ drive away. The work is frequently physical, Smith says, and you’re prepared for that. But it can be emotionally taxing too. “I remember one man in particular who was living off out in the country, up this back road. He was completely isolated, with no family, and he relied on a neighbour to drop in dinners. But other than that he had nobody. Nobody ever passed by his window. It used to break my heart leaving him. I’d want to put him in the car and bring him home. Loneliness is an awful thing.”

The most challenging part of the job, she says, “is when a client passes away. A lot of the time you could be going into a particular client for years, and you’re seeing them more than your own family sometimes. It might only be 45 minutes a day, but it’s quality time. It breaks your heart when they pass away. You try not to get too attached, but of course you do”.

Any carer will tell you, she says, “there will always be a few you’ll never forget”.

At 10.12am, we wait a few minutes for another carer, Denise Morrissey, to arrive to help with Smith’s next client, Joan McGrath. “She just needs help to get up the stairs. Her shower is upstairs, and she’s waiting for a stair lift,” Smith says.

Otherwise, McGrath is in great form. “She’s absolutely gas. She has the best sense of humour. You can talk to her about anything, from the meaning of life, to the most trivial thing.”

McGrath is sitting by the fire when we go in. “Am I going to be in the paper?”

Now 91, she has coffee with “the girls” – one of whom she was in primary school with – in a nearby bar-restaurant at 11am every day. “You could have two of us today, you could have seven tomorrow.”

And she plays cards two or three nights a week. She was playing bridge last night, she says, “with a fella. He was lovely, very quiet”.

“That’s what you want in a man,” says Morrissey.

At 11.05am McGrath’s daughter, Trisha, arrives to take her to coffee. “I’m the taxi. I hope you didn’t do anything bold this morning,” she teases her mother.

As Smith fills in her care plan notes, I ask McGrath what her secret is. “I’ve no idea.”

The bridge is great for keeping her busy, and the coffee mornings. She rarely drinks. And “I eat a good breakfast and a good dinner and the rest doesn’t matter. I had a big slice of quiche and a salad yesterday, and I nearly licked the plate.”

By 11.22am we are with Smith’s next client. She has lived with her son and his family since her husband died. “It was great that he had the space and could open up his home to her,” Smith says.

The client, Jane*, has a brief shopping list ready to give to Smith. “We can’t handle clients’ money, but we have an agreement we can do a bit of shopping for her. Or I might change the bedsheets for her.”

“That’s my favourite girl,” Jane says, when Smith comes back with the shopping. They talk for a while about Jane’s grandchildren, mutual acquaintances, and the travelling she used to do. Jane found the past few years tough, as she lost a couple of close friends. That’s a grief we don’t really talk about, she says. Smith finishes up.

Over coffee at 1pm, Smith says that sometimes the company and the conversation is more important to clients than the physical care she can offer. “You find yourself talking about everything and anything. And you can see by the time you’re leaving, they’re in a better mood.

“Some of them say, ‘Sure what do I have to be talking about? I’m only going from this room into that room.’ But I’d have better chats with some of the clients than I’d have with anyone else.” The important thing, she says is “to actually listen, and not just be talking at them”.

Smith says there is huge value in keeping clients at home, “just having routine and familiarity and being able to eat when they want and sleep when they want”.

Smith’s final client today has been living with her daughter, Kate Madden – a lecturer in nursing – for the past few years. Madden’s mother, who is in her 80s, was diagnosed with Alzheimer’s four years ago, and is approaching the time when she will need palliative care. “She would come to me for holidays, for respite, but eventually her needs became so great that we couldn’t relocate her and bring her back home.”

As Smith tends to her client, Madden says it has been tough at times, particularly in the beginning. “She had mood swings. She didn’t understand that night was night or day was day, and she would call out. So that would disrupt my sleep. That was the hardest part in the beginning.”

But Madden was lucky, she says, to have got a supportive care package from the HSE, with the help of a proactive public health nurse. “We have about 39 hours of care support, which is very good. It means somebody will come in the morning, get her washed and dressed, and get her up. They’ll come in during the day, and again at night and get her ready for bed. I have block hours where somebody will come in at 2.30pm and sit with her until 7pm. And then we employ somebody privately from 9am until 3pm, so I can go to work.”

While she knows how lucky they are to have that level of support, the downside, she says, is the constant flow of people. “You never have your privacy. And I have a six-year-old child, so that can be very difficult.”

But it’s worth it, she says. “My goal was always to keep her here if I could manage it. She’s had a good quality of life. And she was such a good parent to me and my eight siblings. We will look after her now for as long as she needs us. It’s brought us as a family a lot of pleasure to be able to do it.”

Madden introduces me to her mother.

The continuity of care from Smith and her colleagues has been good for her mother, says Madden. “She needs carers who know her, who know what she likes and doesn’t like.”

As we leave, Smith says she can’t imagine doing anything else. “Every day is different; every call is different. At the end of the day, they are very vulnerable. It might be your workplace, but it’s their home, and you have to remember that.”

*Some names of clients have been changed.