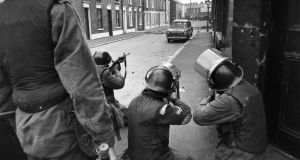 Two former British soldiers are to be charged with murdering Official IRA member Joe McCann in west Belfast more than 44 years ago, the North’s Public Prosecution Service said on Friday.

The decision by the office of the North’s DPP Barra McGrory, QC, comes following a Historical Enquiries Report from 2013 which found that the killing of 24-year-old McCann in Joy Street in the Markets area of central Belfast was not justified. The HET also found that the original investigation of the killing was flawed.

McCann was something of an iconic figure within republicanism featuring on murals and also in republican ballads. He was wanted by the RUC and British army and was involved in many serious shootings including in February 1972 the attempted murder of the then unionist Stormont junior home affairs minister John Taylor, now Lord Kilclooney.

Lord Kilclooney was badly injured in the attack but finally recovered to lead a full and active political life.

The two men are known as Soldier A and Soldier C and respectively are aged 67 and 64. From England and former members of the British parachute regiment they are due to appear in court in Belfast in the next couple of months to face the murder charges.

“Following a careful consideration of all the available evidence it has been decided to prosecute two men for the offence of murder,” said a spokesman for the PPS on Friday.

“The two defendants in the case are surviving members of the army patrol which shot Mr McCann. A third member of the patrol who also fired at Mr McCann died in the intervening years. At present these individuals are not being named,” he added.

The spokesman said the decision to prosecute was taken following a review of the case after it was referred to the PPS by the North’s Attorney General John Larkin, QC.

The decision is certain to trigger an angry response from campaigners who in recent weeks have been challenging decisions to review killings of the Troubles in which British soldiers were involved.

Earlier this week in the House of Commons Sir Henry Bellingham claimed the DPP Mr McGrory was prepared to shift from decision-making based on credible evidence to that influenced by politics.

“This is the person who is prepared to move away from credible evidence to political decision-making, which I find very worrying. It has to be stopped. There are potentially 278 more cases involving the security forces,” said the MP.

Some legal figures believe his comments are part of a wider concerted campaign to target Mr McGrory. The PPS said Sir Henry Bellingham’s allegation was unfounded.

“It is disappointing to note the unfounded nature of some of the comments made in this debate and we would wish to remind those in public office of the responsibilities they hold to maintain public confidence in the criminal justice system,” said a spokesman.

On Friday the PPS spokesman said that the decision to prosecute the former soldiers was taken “following an objective and impartial application of the test for prosecution that was conducted in accordance with the code for prosecutors and with the benefit of advice from senior counsel”.

The shooting of Joe McCann was controversial from the start. At the time former Irish Times journalist Henry Kelly reported that local eye-witnesses were adamant that McCann was shot when he ran away after being challenged to halt by soldiers. He was unarmed.

“An eye-witness to his death says that when he did not stop for soldiers he was shot at and hit in the leg, then he staggered and fell, after which a British soldier fired as many as ten rounds of live ammunition,” Kelly reported.

Following the HET report of 2013 his family asserted that he could and should have been arrested rather than shot.