Bernadette Scully criticises lack of services for people with disabilities 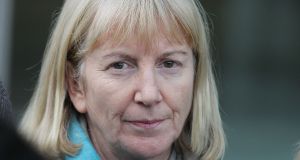 Bernadette Scully from Co Offaly is seen leaving the Central Criminal Court in Dublin this afternoon where she was found not guilty of the manslaughter of her daughter, Emily Barut (11). Photograph: Collins Courts

Bernadette Scully used her post-verdict statement on Friday to highlight the absence of services for people with disabilities and to urge those in danger of self-harming to reach out for help.

Her solicitor, Patricia Cronin, read her statement to the media outside the Central Criminal Court, after she was cleared of the manslaughter of her profoundly disabled daughter by giving her too much sedative.

The Offaly GP was charged with unlawfully killing 11-year-old Emily Barut at their home at Emvale, Bachelor’s Walk, Tullamore. It was alleged that she killed her by an act of gross negligence involving the administration of an excessive quantity of chloral hydrate on Saturday September 15th, 2012. She pleaded not guilty.

“As I said in my evidence, Emily was my little bird with a broken wing, whom I loved, cared for and protected,” she wrote.

“Our struggle is mirrored in the lives of so many people in similar situations in Ireland. Like me, very many parents and carers of children, who are disabled, struggle on a daily basis to get access to services and support systems, which very often are simply not there.”

The 58-year-old said she had been in a very dark place four years ago, feeling she had no reason to live after Emily had passed away. She said, with the help of family and friends together with professional support, she found the strength to go on.

“To anyone with mental health difficulties, or who has gone to that dark place of considering self-harm, I would plead with you to reach out to even one person and say how you feel and get the help you need,” she urged.

She said she respected the need to investigate her daughter’s death but described the past four years as hell for her and her family.

Not only had she lost her “beloved Emily”, she said, but she had been unable to attend her funeral. She said she hadn’t had the opportunity to grieve properly or to celebrate Emily’s life, which she described as precious.

“These proceedings have left me traumatised and emotionally, physically and mentally exhausted,” she said.

She thanked her partner, his daughter, her own mother and siblings, along with the judge, jury, court officials, gardaí and her legal team, including barristers Kenneth Fogarty and Gerard Groarke.

She also thanked the paramedics and medical staff, who had treated her and Emily following her death.

She said she had been humbled by the kindness shown by her family, friends, neighbours, colleagues, the people of Tullamore and Edenderry, as well as by complete strangers, who had sent messages, cards, flowers and Mass bouquets and letters.

“Your positive energy has helped me and my family enormously in surviving the past four years and, in particular, during the course of the trial,” she said.

She then asked that her privacy and that of her family be respected, before leaving the Criminal Courts of Justice for the final time.