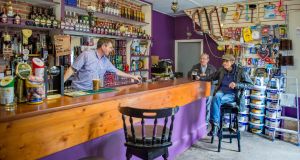 The woman was a stranger to Ballaghaderreen, Co Roscommon, that night about two years ago. It was quiet, and dark. The visitor was surprised. “Everybody must go to bed early here. There are no lights on,” she remarked to Imelda Towey at the corner shop on Main Street. Imelda put her right: “That’s because the houses are empty,” she told the woman.

Towey’s corner shop is an institution in Ballaghaderreen. It’s been there 73 years. Annie Towey, the woman who ran it for most of that time, died last December aged 99. It is run by her daughter Imelda who believes that now “there are about eight people living on Main Street. Maybe 12 on [nearby] New Street.”

It is all so different when she was growing up. “There were nine of us here, five Moynihans next door, five Deerys above that.” Across the street there were the McCormacks, McAnenas, Hannons, Cunniffes, Durkins, McHughs and more.

All were families living in that immediate area. Ballaghaderreen was full of families then. In the 1970s and 1980s “the trend was to move out,” she recalled, away from the shop, the pub, the business.

“All that buzz has gone out of the town in the evenings.”

That evening two years ago the woman who was so taken aback by the silent streets of Ballaghaderreen commented: “I can’t get over it for the size of the town. In Dublin they’re bringing people back into the city,” she added.

Further up, in New Street, Pádraig Mulligan has similar memories. His hardware shop/pub was opened by his father in 1944. He remembers families who lived across the street from him and his three siblings as they grew up: Reagans, Shrynes, Toweys, Noones. “All kept cows at the back.” All gone now.

When he was younger his father Jimmy told him to“go away and get a job for yourself”. He didn’t. Behind him in the bar is a framed article about it by an Australian journalist titled Quirky Pubs of Ireland.

Competition from such as Woodies, Aldi, Lidl is “harder and harder.” Against the odds he extended recently. “The building next door became available and I needed space.” His father used say “displayed is half sold.” With a son in Australia and another in China he is not sure about the future. “But you’re better at something than nothing,” he said, adding “it’s a social life as well.”

Nearer the town centre Mary Gallagher notes there has been a continuous business on her premises for 191 years. “It was a butcher shop and bar.” Now it’s mainly a children’s and lady’s wear shop, with bar.

A family business and one of the best preserved premises in the town she, her husband Micheál and their family returned there from London 45 years ago when Micheál’s mother decided to retire.

A keen local historian, Mary remembers with vivid detail the liveliness of the town when she was younger. On Station Road nearby “there were 40 kids at any one time. It was a terrific place to grow up.”

Now there is just one family on nearby Tay Street (Market Street), the hub on fair days, with cattle on the street and pubs serving food and drink. All “killed off by health and safety. They took off to [the mart in] Castlerea. And John Joe Coleman’s on the Square with his Irel coffee, condensed milk, and a block of cheese on Friday’s,” she said.

Across the street from Gallagher’s were two large department stores, Flannery’s and Duff’s, with another, Gordon’s, on the corner. The department stores had grocery shops, drapery with tailor-made suits, elaborate dresses, millinery, footwear, hardware, bakeries, bars, bottling plants. There was Bill Greaney’s pub, Kenny’s “which was like Disneyland at Christmas, and the Delia Murphy records. The magic of it”.

All gone now. Such department stores were “a thing of the past, sadly”, but “the corner shop will always survive.” She worried about online shopping. It was “the kiss of death. The boredom of it makes me sad. And what will bring people into the town?”

As it was “the Lidls and Aldis are sucking the life out of the community”.

One of the main businesses these days is Durkins on the Square. A bar and restaurant with accommodation, like many businesses in the town there were concerns leading up to the opening of the N5 bypass to the west in 2014 and about how it might affect trade. It has.

Andrew Durkin has noticed that in particular on bank holiday Mondays, “the passing trade between 2 and 6 [pm] is gone”. He doesn’t blame the motorists. “I do the same myself on the way to Dublin, passing Kinnegad and Enfield. ”

He is annoyed at not being allowed put a sign on the new bypass advertising Durkins. He was told it was in breach of the Litter Act. It frustrates him as he has seen such signs on the motorway to Shannon airport. On inquiry he was told it was up to each local authority as to how it implemented the Act.

In general, however, he felt business had picked up this year mainly involving local companies and visitors.

On the Square, which extends to Barrack Street, there are just two families now, with older people in some other houses, he said. He grew up on Main Street but later built a house outside the town. Away from work, “it could be Connemara”, he said.

“People often remarked on the closed-down shops” in the town, he said. “The young are buying online and people don’t buy locally. Something has to be done. Small towns don’t need huge businesses. Small businesses are more sustainable.” There was “no reason why internet companies should be based in Dublin or Galway, and there’s a better quality of life here”, he said.

Ballaghaderreen once had the highest per capita number of pubs of any town in Ireland. In the 1960s there were 77 pub licences there for a population of about 1,500. It now has eight pubs for 1,822 (2011 census).

One of the most successful of those is Spells on Pound Street, owned by Neil Sheridan. His customer base has “more than halved since 2008” through unemployment and emigration and “debt issues” which had hit incomes of those remaining.

There was also “a changing culture” with “so much entertainment, like Netflix and such as well as drinking, in the home.”.

“People assume it’s going to be quiet (in the pub) and there’ll be no craic.” This is why he keeps a programme of almost non-stop entertainment in Spells, with an emphasis on music, traditional and contemporary. “You get in a lot, to spend a small amount of money,” he said. Marketing is key, he feels.

He has been centrally involved with the successful Secret Village summer music event in the town over recent years, using social media, and he launched a Facebook competition last month to name the new four metre-high (13ft) Gallowglass Warrior sculpture erected on the bypass last June.

Neil believes marketing is key to the future of small towns like Ballaghaderreen, instancing Kildare Village and Westport as examples.

Angela Purcell owns one of the best known pubs in Ballaghaderreen, Clarke’s on Pound St. It is now the only pub on that side of the town. There’s been a pub there since about 1850 and it has been Clarke’s since her mother and father took it over in 1947.

When she grew up “on Pound St there were four, five, six, seven . . . 10 children in families. All happy memories and very safe. All privileged to have a garden.” She is the youngest of six. Her son and his family recently moved into the pub. They are the only family on the street. There are some older people and some foreign nationals but most houses are empty.

She believes people should be encouraged through tax reliefs to buy houses on the street, “to make use of them, create small businesses, create jobs, get people back into the town, bring life back. They could make lovely homes.”

“It has been done in Westport and Carrick [on Shannon]. If it can be done in some small towns why not others?”

With “some imagination and encouragement it could be an awful lot better” but “if something isn’t done the houses will fall in”. She praised local voluntary groups, “such as the Tidy Towns, who are great”, but asked “what more can they do?”