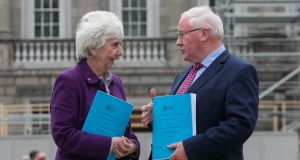 Vice-chair Maureen O’Sullivan TD and chairman Brendan Smith TD during a report launch of the Irish Aid Programme by the Joint Committee on Foreign Affairs and Trade and Defence at Leinster House, Dublin. Photograph: Gareth Chaney/Collins

Legislation which would bind future governments into meeting Ireland’s foreign aid commitments should be introduced with all-party agreement, a member of the Oireachtas Committee on Foreign Affairs has said.

Speaking at the launch of the committee’s review of the Irish Aid programme, Deputy Sean Barrett called for all-party agreement in the passing of legislation that would “set targets, real targets, so that irrespective of a change of government, these targets would have to be met”.

“Until that happens we are always going to have temporary bumps,” he said.

The review called on the Government to introduce “a multi-annual plan to increase the aid budget on an incremental, phased basis”.

It said “a firm commitment to achieving official development assistance expenditure of 0.7 per cent of GNI [gross national income] by 2030” was “critical to the future of overseas development”.

Committee chair Brendan Smith TD said it was “vital that Ireland continues to keep its aid promises to partner countries”.

The review “demonstrates cross-party support for Ireland continuing to play a leading role in tackling poverty overseas through targeted development assistance. But now it is time to match our reputation with resources.”

Commenting on the continuing slaughter in Syria, he said “the murder of so many innocent people these past few days reinforces the absolute need for the international community and the UN to try to get a meaningful ceasefire”.

“All we can do is support the UN and support the work of the EU. I think the Unicef statement the other day, stating that there are no words to describe the situation – I don’t think there is a better description of the horror that has been inflicted on innocent people.”

Asked about sex scandals involving Oxfam and some Irish aid agencies, as disclosed over recent days, Mr Smith described these as “very disturbing and reprehensible and totally unacceptable”. This, however, “shouldn’t take away from the good work that is being undertaken by the 99.99 per cent of the people and the organisations”, he said.

In Ireland, Dóchas was “the overall umbrella body for our NGOs”, he said. “Any organisation getting State funding here, they have to abide by the Children First guidelines. There are codes of conduct, quite rightly, in regard to governance, in regards to recruitment, in regard to human resources and all of that,” he said.

Such behaviour as was reported last week “is not acceptable. It does damage the good work that is being undertaken by so many committed people and it also undermines the confidence, unfortunately, of people who are generous donors as well,” he said.

Over recent months the committee has undertaken a review of the Government’s official development assistance programme, Irish Aid. Its review found “the positive reputation of the Irish Aid programme and its high quality was a recurring theme in discussions with witnesses”.

Committee members, based on their visits to key partner countries such as Malawi and Mozambique, and engagement with stakeholders, “overwhelmingly endorse that positive reputation and urge that the focus of Ireland’s aid, directed to addressing the needs of the poorest and most vulnerable communities, continues”, the review said.

Concern chief executive Dominic MacSorley said the review “shows why the Irish public can continue to feel truly proud of our aid programme”.