Adoption files around the country could be seized under new Bill 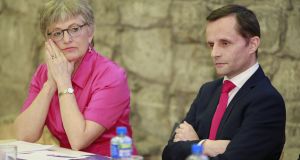 Minister for Children Katherine Zappone and AAI chairman Dr Geoffrey Shannon: legislation would make the authority the custodian of these sensitive adoption records. Photograph: Nick Bradshaw for The Irish Times

Up to 200 potential locations holding adoption files around the country have been drawn up in a draft document by the Adoption Authority of Ireland (AAI).

The authority would have the power to seize and archive them in the event controversial legislation were passed.

The Adoption (Information and Tracing) Bill, which has been dogged with problems regarding access to personal historic information, would make the AAI the custodian of records.

The “possible consequences” of the legislation were considered “in great detail” throughout 2018, the agency said in its annual report published on Wednesday.

It outlined preparations under way last year ahead of the Bill’s progression through the Oireachtas, including the file location list and efforts to secure a new premises for it and the archive next year.

AAI chairman Dr Geoffrey Shannon said a scoping exercise put the number of potential file locations at 160, held either by individuals or private institutions. These are outside of those in the possession of the AAI itself, Tusla, the child and family agency, and some other accredited bodies.

“If passed, the Adoption (Information and Tracing) Bill will confer on the Adoption Authority the power to seize records held by private individuals and place all such records in one place under the auspices of the National Archives Act as a place of deposit. This is the gold standard for the preservation of important and sensitive records,” Dr Shannon said.

The AAI has also held talks with the National Archives, Military Archives, Mercy Sisters Archives, the Commission of Investigation into Mother and Baby Homes and the Department of Children and Youth Affairs.

“It is hoped that the pending legislation will provide adopted people and other relevant people with statutory rights to information and to a tracing service, and will protect all adoption records by bringing them into the custody of the Adoption Authority,” the report said.

The Bill was put on hold last month by Minister for Children Katherine Zappone following ongoing controversy surrounding how access to historical personal information would he handled, particularly with regard to the privacy rights of parents.

It aims to establish a statutory scheme for information and tracing for adopted people.

Although an Independent member of the Government, Ms Zappone recently addressed a meeting of the Fine Gael parliamentary party where she set out the difficulties in pressing ahead with the legislation.

Separately, the AAI report showed that seven infants were placed for adoption within Ireland last year, out of a total 72 granted domestic adoptions over the 12-month period.

The majority of these (35) were stepfamily adoptions, and there were 25 adoption orders in respect of children in long-term foster care. The child was aged six or under in 12 cases.

The AAI received 121 requests for birth certificates, and granted 43 applications. It also facilitated 105 “matches” from its National Adoption Contact Preference Register, a service allowing both parents and children to express their interest in meeting.