Hundreds march through Dublin to protest against "restrictions" in Ireland's abortion legislation. 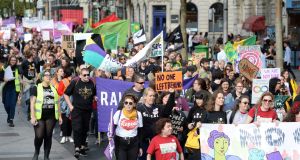 The abortion rights march started in the Garden of Remembrance and ended in Merrion Square in Dublin. Photograph: Dara Mac Dónaill

Abortion rights activists marched through Dublin on Saturday to protest against the “restrictions” in the Ireland’s abortion legislation.

The theme of the 8th annual march, which was the first since Ireland legalised abortion in December last year, was “nobody left behind”.

Campaigners called for greater provision of abortion in rural Ireland, the introduction of safe-zone legislation and the removal of the three-day waiting period. They also voiced support for legalising abortion in Northern Ireland.

Legislation brought in at Westminster in July means if the Stormont government is not restored by October 21st, abortion will be decriminalised in the North.

The march, which started in the Garden of Remembrance and ended in Merrion Square, was attended by a few hundred people, but was considerably smaller than the previous marches leading up to the referendum.

Charlene Delaney, a spokeswoman for Abortion Rights Campaign, the group that led the demonstration, said while they were happy with the turnout, “it could always be bigger”.

“A lot of people have burnout from the repeal campaign and then others think the work is done but there is still work to be done,” Ms Delaney said.

“We have been repeatedly promised legislation on safe-zones and that hasn’t materialised yet. Abortion is a private matter, and women should not be subjected to protests. It’s not considered a crime now but it could quickly escalate into physical violence. And it’s very psychologically traumatic.”

Sarah Maloney (29) from Dublin said she decided to join the march because “the legislation isn’t perfect”.

“We really need exclusion-zone legislation. The psychological impact that being met by protesters could have on women seeking abortions is just not okay,” Ms Maloney said.

Peter Corrigan (31), who is also from Dublin, said he participated to fight for women and their right to not be questioned when making decisions around abortion.

“The kind of restrictions that have been put in law, around having to wait and see different medical professionals, I think that’s very dehumanising for a woman who has gone through a process prior to making a decision,” Mr Corrigan said.

“Her rights as a human being aren’t being [respected] when she is second guessed and such.”

As the participants walked down O’Connell Street, they met a handful of anti-abortion protesters.

Patrick O’Shea, an American man who now lives in Ireland, said that he and his friends from the Church of God were there because they believe “abortion is the ultimate exploitation of women”.

“We’ll continue to fight this. The people will see the truth. It’s all about protecting women,” he said.

Representatives from Amnesty International, the Union of Students in Ireland, the National Women’s Council of Ireland and migrant rights groups were also in attendance.

Marge Berer, a spokeswoman for the international campaign for women’s right to safe abortion said global access to abortion was necessary because one in four pregnancies ends in an induced abortion.

“Abortion is necessary healthcare for girls and women because unwanted pregnancy is a reality of our lives. It is crucial that there is universal access to safe abortion as part of women’s right to life and health,” Ms Berer said.

“Motherhood must be voluntary if women are to be in charge of their own lives. Gender equality and safe motherhood will not be achieved without this critical healthcare service.”