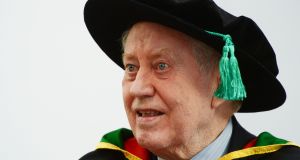 A file image of Charles F. ‘Chuck’ Feeney, founder of Atlantic Philanthropies, before he was conferred an Honorary Degree jointly by the Universities of Ireland North and South at a ceremony in Dublin Castle. Photograph: Alan Betson/The Irish Times.

Taoiseach Leo Varadkar has praised Atlantic Philanthropies which is holding its last Irish board meeting after a 30-year grant allocation programme which saw it award amounts totalling €6.6 billion.

Mr Varadkar praised the organisation for its contribution to peace in Northern Ireland, support for healthcare, equality, and third-level education, and its help in changing attitudes to the LGBT community.

Of the total allocated by the organisation, €1.6 billion has been allocated to projects in the Republic and Northern Ireland.

Mr Varadkar told the board when he met them on Monday that there was enormous respect in Ireland for the work the organisation has done.

The board meeting, which continues until Wednesday, will focus on Atlantic’s final group of grants, the global, interconnected Atlantic Fellows programmes, which are designed to empower communities of emerging leaders to advance healthier, fairer, more inclusive societies.

The largest of the total of $600 million (€536 million) committed for the Atlantic Fellows is the Global Brain Health Institute (GBHI) grant, a joint $177 million initiative of Trinity College Dublin and the University of California, San Francisco.

GBHI’s goal is to reduce the scale and impact of dementia around the world by training and supporting a new generation of leaders to translate research evidence into effective policy and practice.

It is the largest programme grant Atlantic Philanthropies has ever made, is the biggest philanthropic donation in Irish history, and the largest ever received by Trinity College Dublin.

Atlantic was founded by businessman Chuck Feeney, who funded it by giving away his wealth. In a message to the board he said he hoped the “seeds now sown” would “bear the fruit of good works well into the future.”

The Irish American businessman said Ireland “has always been, and remains, a very special place for me and for [HIS WIFE]Helga.

“We have been blessed to know and work with so many exceptional people and organisations. We are deeply grateful to them for providing us an opportunity to make a lasting difference in the lives of others.”

Atlantic president and chief executive Christopher Oechsli said those who had worked to “steward Chuck’s wealth” to realise his vision of making Ireland and the world a better place, had been privileged.

“Our wish is that others will be influenced and inspired to do more of the same.”

After establishing Atlantic in 1982, Mr Feeney quietly committed to devote his wealth to the service of humanity, he said.

Atlantic completed grantmaking in 2016 and will conclude operations by 2020.