‘It’s very hard to watch your child in severe pain’ 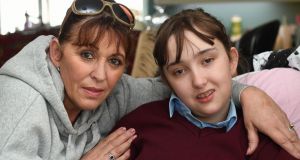 Tina McElligott (16) with her mother Margaret, in Kilflynn, Co Kerry: her Alpers syndrome is relieved by cannabis oil, which is still illegal in Ireland.

Tina McElligott (16), from Kilflynn in north Kerry, has had seizures which exhaust and frighten her “all her life”.

Since returning from a clinic in Spain specialising in cannabis-based treatments two weeks ago, however, she has not had one.

Finally diagnosed last year with Alpers syndrome, Tina has spent her life worn out and in chronic pain, says her mother Margaret. She has been on over 20 medications, none of which eased her pain or her seizures adequately.

When she was diagnosed her parents were told she had about six months to live and that her brain was deteriorating. The seizures got worse and longer.

Her husband heard about cannabis oil to treat seizures and, says Margaret, they felt they had nothing to lose. “‘Here goes,’ we thought. ‘It’s a natural oil, it’s from plants, from the earth.’ The medication she was on was going to kill her anyway.”

They were able to access CBD oil, through the Charlotte’s Web site, but not the more effective THC oil which is illegal in Ireland. They heard about the Kalapa Clinic in Barcelona, which specialises in cannabis-based treatments, and travelled there with Tina in May.

“It was our last hope,” says Margaret. “We were in Barcelona for two weeks, but it was too expensive, so we moved south to Salou which was more relaxed.”

They were in Spain for six weeks, during which time her weaning off medication, and her CBD and THC treatment was supervised by doctors.

Asked what Tina now takes, she says she takes 0.3 mg of CBD in the mornings and four drops of THC oil under the tongue, at night.

“This is what my child needs and I’ll fight tooth and nail to make sure she gets it.”

They return to Barcelona at the end of the month for a check-up and to pick up more of the prescription cannabis-based oils.

“Yes, the obvious thing would be to be able to get this here at home, in my local chemist, for medical use. I’m hoping someone in Government with a brain in their head is going to make that happen.

“It’s very hard to watch your child in severe pain. This treatment is the only thing that has worked for Tina.”