‘When I look at the viral loads we find in elderly people, it is mind boggling’

Virtual reality images taken from a coronavirus patient in a Washington DC hospital shows how the virus can invade the lungs and kill. Video: The New York Times 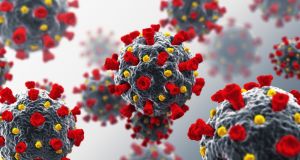 The Covid-19 virus is “incredibly aggressive and spectacularly contagious”, according to leading coronavirus scientists.

Virus numbers are three times what might be found with other respiratory viruses such as flu, including in older patients, who are more contagious than expected.

“These are the highest viral loads for any virus I know,” said Prof Marc Van Ranst at the Rega Institute for Medical Research in Leuven, Belgium.

He said he was astonished at the number of the germs he saw from patient throat samples in his lab. Especially surprising, he said, was that elderly people harbour prodigious quantities of virus.

When older people become infected with viruses like flu, they do not produce many virus particles, because their mucosal surfaces are older and drier, it was believed.

“Not many elderly [PEOPLE ]are going to transmit the influenza virus to someone else. They get infected, but are not infecting others,” said Prof Van Ranst – not so for Covid-19.

“When I look at the viral loads that we find in elderly people, it is mind boggling,” he said. “That has been for me the big surprise with this virus.”

This will influence how contagious elderly people can be and perhaps is reflected in the high number of Covid-19 clusters in nursing homes, Prof Van Ranst added.

The virus is abundant in the throat of younger patients too, according to viral counts reported in the science journal Nature this week. Nine young to middle-aged office workers near Munich, Germany, who showed mild flu-like symptoms, had their nose and throat swabbed daily and spit samples collected for viral counts.

“We detected Sars-CoV-2 in enormous amounts in the upper respiratory tract,” said Prof Clemens Wendtner, who led the research in Germany – 1,000 times more than for Sars. “This was shocking news.” He is head of infectious diseases at a teaching hospital of Ludwig-Maximilians University in Munich.

All nine patients showed a high rate of viral replication and shedding in their throat during their first week of infection. The virus does not need to travel to the lungs to replicate, and is abundant in the throat, making it easy to pass on. “It can be spread easily by sneezing or coughing,” said Prof Wendtner.

His hospital now has 190 Covid-19 patients and “there is no difference between the young and elderly” in viral load. There are three times more Covid-19 viruses on patient swabs compared to viruses such as influenza or RSV.

Covid-19, said Prof Wendtner, “can be transmitted by elderly people in care home”. He advises “face and mouth protection for the entire population, regardless of age”, which is being considered in Germany.

“The viral loads that people encounter when someone coughs in their general direction,” are so high, said Prof Van Ranst, that it makes transmission likely to happen. “Compared to other respiratory viruses, this is remarkable,” he added. It also meant it was easier for those with even mild symptoms to contaminate surfaces.

The Nature paper confirms that “for the milder form of the disease, it doesn’t go as far as the lungs, but stays in the throat”, said immunologist Prof Luke O’Neill of Trinity College Dublin.

“It means it is very transmissible just by talking. You don’t need to cough,” he said. Also, people without symptoms, “are very infectious,” he added.

“Sars never infected the throat. Went straight to the lungs. So a that’s big difference,” he explained.

“For Sars-1,” said Prof Wendtner, “it was very difficult to put these viruses into cell culture. It is quite easy for Sars-CoV-2, due to the fact that we had high viral loads.”

Some patients in Munich did not have fevers, yet some were super-spreaders. “It is not easy to identify Covid-19 patients,” he warned.

Most of the patients developed antibodies against the virus around day 7 of symptoms, she added.

Prof Van Ranst said the pandemic was exposing weaknesses in national healthcare systems. “In Belgium it is the elderly care homes. The quality is not good enough in terms of withstanding a medical crisis.”

“In the Netherlands and the UK, it is the number of intensive care beds which is really problematic. In the US, it is the lack of universal healthcare that is the biggest problem,” he said.

Ireland had a similar number of ICUs per person as the UK, and nursing homes here had been badly impacted by Covid-19 .