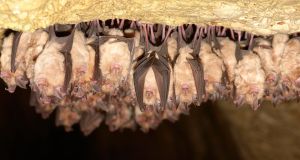 How did Covid-19 come to be? It’s a puzzle that involves tolerant bats, possibly middlemen pangolins and a virus that gathered structures and tricks along the way and jumped into humans. The resulting virus, Sars-CoV-2, has caused the sort of pandemic that scientists reckoned was on the way at some point, but what steps did it involve?

The structure and genetics of the virus give us clues about the path it took to people, says Prof Emma Teeling, who studies bat genetics and phylogeny, or how genetic material evolves and changes over time.

Let’s start with the bats. They can tolerate many disease-causing agents that other mammals cannot, and horseshoe bats in China are known to host many types of coronavirus, says Teeling, who is based at University College Dublin school of biology and environmental science.

“We don’t know why these horseshoe bats can host such a high diversity of coronaviruses and not get sick themselves; that is something we are researching,” she says. “But when you go looking for viruses in these bats, you find lots of them, and the original Sars that affected humans in the early 2000s most likely originated in these bats before passing into another species, where [the virus] mutated to become infectious to humans.”

Viruses in the mix

When coronaviruses are in a host animal, they can mix together and swap parts, combining to make new structures, adds Teeling, who has been keeping up to date with the flurry of genetic studies on the new virus, Sars-CoV-2.

The evidence suggests that one of those “mixers” may have been a coronavirus in bats called RaTG13. “If you compare the genome of RaTG13 and Sars-CoV-2, you see about 96 per cent similarity.”

But RaTG13 lacks an important structure that is found in Sars-CoV-2, which makes the latter virus highly infectious in humans. The new coronavirus enters human cells by attaching to a structure on the outside of cells called the ACE2 receptor. That allows the virus in, where it hijacks the machinery of human cells to make more viruses.

Where might Sars-CoV-2 have picked up this liking for human ACE2 receptors? It turns out that pangolins, a scaly animal used by humans for its meat, carry coronaviruses that bind ACE2 receptors in a similar way to Sars-CoV-2. “It’s possible that the RaTG13 virus was circulating in horseshoe bats, then jumped to pangolins and in the mix it acquired the structure that makes it more infectious for humans,” says Teeling.

Hiding from the immune system

Sars-CoV-2 has another trick up its sleeve, too, and this one presents more of a mystery, says Teeling. “The new coronavirus has a ‘spike’ protein on its surface that it uses to attach to human cells, and this is similar to classic Sars-CoV, but there is a difference,” she says. “Sars-CoV-2 has a novel structure in its spike protein that may allow it to hide from the human immune system. We see this kind of structure in some other viruses, but not in the coronaviruses that we find in bats or pangolins.”

If you start mixing together animals not normally found together, it can create a perfect storm

So Sars-CoV-2 has a backbone similar to a virus found in a bat, it infects like it would in a pangolin and it has an immune-tricking cloaking device that appears to have come from somewhere else.

“A new virus emerging is like putting bits of Lego together and adding bits on to make a new structure,” Teeling says. “If you start mixing together animals not normally found together, it can create a perfect storm. The viruses use building blocks of each other to adapt to their new hosts, and they have now found us. When this virus got into humans it may have changed again, becoming really good at infecting us and causing illness and overstimulating our immune systems.”

Understanding how reservoir or intermediary hosts deal with the viruses can give us information about tackling Covid-19, adds Teeling, who spearheads an international project, Bat1K, to sequence the genomes of 1,000 bat species backed by funding from the European Research Council and Irish Research Council.

“This is not the fault of horseshoe bats; we should not blame them for having a virus that was part of this chain,” she says. “Instead we need to look at why they don’t get sick.”

Their research in other bat species has shown that bats can mount a rapid immune response against viruses and then, crucially, switch that response off quickly. “This is the kind of biological understanding that can inform ways of treating viruses in humans, and it’s thanks to years of global research into bat genetics and biology that we have this kind of information,” Teeling adds.