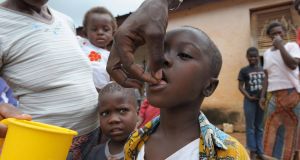 Ivermectin is used to rid animals and humans of many internal and external blood-sucking parasites. File photograph: Getty Images

Could a drug discovered in the 1970s help to tackle the Covid-19 pandemic? New evidence from research in Australia shows that the anti-parasitic drug ivermectin can inhibit the virus that causes Covid-19 from replicating in cells in the lab.

While findings show promise, the news should be greeted with caveats, according to Donegal scientist Professor William C. Campbell, who shared a Nobel Prize for his role in the discovery of ivermectin.

“The report is, in itself, of great importance,” says Prof Campbell of the study, which was carried out by scientists at Monash University in Melbourne. “But perspective is needed, even though perspective can be boring when the results are exciting.”

The researchers in Melbourne grew mammalian cells in the lab and infected them with the Sars-CoV-2 virus that causes Covid-19. Then they exposed the cells and viruses in the lab to ivermectin, a drug that has been widely used for decades to control parasitic worms and insects in livestock, pets and humans.

One of the best known uses of ivermectin in humans is against the worm that causes river blindness - the pharmaceutical company Merck donated the drug for that use for millions of people in affected areas.

Prof Campbell, a graduate of Trinity College Dublin, shared the Nobel Prize in Physiology or Medicine in 2015 for his part in the discovery and development of ivermectin and its use in treating river blindness.

While he was working at Merck Research Laboratories in New Jersey, he was part of an extensive team that identified a substance called avermectin, which was produced by bacteria and could stop parasitic worm infections.

The compound was enhanced and developed as ivermectin, becoming a treatment for parasitic diseases such as heart worm in dogs and river blindness in humans. The Royal Irish Academy will publish Campbell’s memoir this June.

While ivermectin has not been approved as a drug against viruses, it is known to be effective in the lab against a broad range of viruses including HIV, Dengue and Influenza.

The Australian research showed that ivermectin resulted in a 5,000-fold reduction of Sars-CoV-2 RNA within 48 hours. “Ivermectin therefore warrants further investigation for possible benefits in humans,” explains the study authors in the journal ‘Antiviral Reports’.

“So the probability of ivermectin being used safely to kill the virus in people must be considered low,” he says.

“On the other hand, there is, as the authors of the report point out, the possibility that a safe dosage of ivermectin might reduce the rate of viral replication in the mammalian body, or affect the virus in other ways that might be revealed by further research. That is a more positive prospect.”

Commenting on the study, lead researcher Dr Kylie Wagstaff from the Biomedicine Discovery Institute at Monash University says: “Ivermectin is very widely used and seen as a safe drug. We need to figure out now whether the dosage you can use it at in humans will be effective - that’s the next step.”