What is California doing to prevent the next major wildfire?

Efforts to counter the threat have fuelled much experimentation and investigation 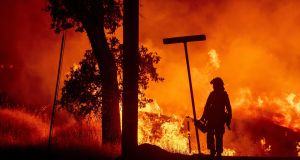 A firefighter lights backfires during the Carr Fire in Redding, California, in July 2018. November’s Camp and Woolsey fires in the state resulted in dozens of deaths and cost tens of millions of dollars in property damage. Photograph: Josh Edelson/AFP/Getty Images

Douglas Mac Donald has lived in the Alpine Oaks Estate mobile home park for the past 10 years. At about 11am on July 6th last year, in the midst of a record-breaking heatwave, the smell of smoke began seeping into his home 30 minutes east of San Diego.

“I looked outside and saw black smoke. It [the wildfire] had got to the ranch behind us,” he says. “I started banging on [neighbours’] doors. We had about five minutes to get out.” A scrub-covered hill directly behind the ranch was alight with windswept flames. Mac Donald (67) and his wife quickly jumped in their car and drove to a supermarket car park several miles away, where they took refuge and watched the fire spread. “We’re talking about all this happening in 15 or 20 minutes,” he says.

Dubbed the West Fire, Mac Donald estimates the blaze reduced nine neighbouring mobile homes to ash; his own was spared. The flames moved so fast that the fire didn’t burn all the vegetation in its path, instead skipping less flammable trees and foliage. Within a few hours, the flames spread across Alpine, destroying or damaging 49 homes, dozens of barns and sheds and scorching 505 acres.

Six months on, the adjacent hill and trees around the mobile home park are still blackened. The stench of charred roadside vegetation lingers. Along Alpine boulevard are signs of the fire’s path jumping back and forth across the tarmac road.

“We were out of our house for 26 days before we were allowed move back in,” says MacDonald. “When you live in California you live with fires.”

November’s devastating Camp and Woolsey fires in north and central California resulted in dozens of deaths and cost tens of millions of dollars in property damage, bringing into sharp focus the huge task facing California and how it should deal with the growing wildfire threat.

The southern reaches of California are at considerable risk, too. San Diego’s 88,000 wildfire at-risk structures is the highest number in the state outside of Los Angeles. Until December 2017, the Cedar Fire, which broke out 25km north of Alpine in 2003, was the largest in the state’s history and left a searing mark in the collective consciousness of San Diego residents.

More recently, a small canyon fire last March in the central University Heights district hit home for many that with the right conditions, wildfire can strike almost anywhere. Experts say the city of 1.42 million people is particularly susceptible to urban fires due to the hilly, vertical topography of many of its suburban districts; oftentimes in such areas burning embers need only fall downwards to reach an adjacent home.

In the absence of sufficient autumn rainfall, Santa Ana winds – the so-called “fire weather” that fuelled such damage in the towns of Paradise and Malibu last autumn – can contribute to blaze-friendly conditions in southern California and western Mexico throughout winter until February. What’s more, according to a 2016 study, when wildfire intervals are shorter than 10 to 20 years, native flora is often replaced with weeds and grasses that are more flammable. All this is worsened by the fact that bark beetles are thought to have attacked and killed 129 million drought-stricken trees in California, turning them into dry lumber.

To help counter these threats, San Diego’s latest development blueprint has fire prevention as a centrepiece issue. Homeowners are encouraged to build fire breaks and defensible space around their homes, and at-risk properties are individually inspected by fire agents. Across San Diego, 35 fire-safety councils have been involved in offering free smoke alarms and installations to seniors and residents in high-risk areas through a partnership with the Red Cross, the Burn Institute, San Diego County Fire and the Fire Safe Council of San Diego County. The Santa Ana Wildfire Threat Index generates six-day forecasts and threat ratings for four heavily-population California regions, including San Diego.

Traditional fire prevention measures have focused on controlled vegetation burning or “prescribed fires”. Last year, the California’s department of forestry and fire protection vowed to triple the number of prescribed fires it conducts on state-controlled land. But some argue it’s a method that’s costly and ineffective.

A huge range of conditions must first be met before one can be signed off, including: positive environmental impact assessments, correct wind speed and temperature variations, local air-quality levels and the availability of firefighters. They are also unpopular: residents are rarely happy to have to deal with the associated smoke, while conservationists fear they hurt wildlife unnecessarily.

With suburban communities and the wilderness increasingly entwined as San Diego’s population expands ever deeper into the eastern hills, efforts to counter the fire threat have fuelled much experimentation and investigation.

Researchers at UC Berkeley and elsewhere generated 20-year simulated models to try to predict where local municipalities should purchase property that could be left as fallow, conservation land in order to reduce the likelihood of wildfires coming in contact with people.

Typically, what we’ve seen is that areas with homes closer together are less likely to burn

“Integrating private-land conservation decision-making with wildfire risk reduction is potentially a new and innovative approach to more cost-effective conservation planning,” the resulting research, published in Landscape and Urban Planning in 2017, found. “Typically, what we’ve seen is that areas with homes closer together are less likely to burn,” says Prof Van Butsic, a co-author of the report.

However, the modelling also found that inexpensive land parcels, the very property that municipalities and conservationist land trusts can afford to buy, are often found where the threat of fire is low. Above all, the modelling found that purchasing land with the goal of putting as much distance as possible between people and the flames needs to be highly strategic.

For many Californians, their concerns lie elsewhere. For the wealthy, the demand for large residential lots adorned with mature trees and other easy-burning foliage remains as strong as ever. For others, the cost of everyday life means that conservation is often little more than a passing concern. In January, Californians were angered by proposals from utility provider Pacific Gas and Electric Company to introduce a $10 monthly rate hike to help it pay for improved wildfire monitoring systems. By January 29th, however, the company had declared bankruptcy and now faces a pending legal maelstrom associated with November’s wildfires in Paradise and Malibu.

Some problems emerge months, even years, after a fire strikes

On top of that, the fact that the federal government owns almost 60 per cent of the forestland that covers a third of California means that putting in place a state-level plan to combat wildfires is additionally complicated. Conservationists and fire-control authorities have historically been on opposing sides of the debate around how to stop wildfires. The latter regularly favours using controlled burnings while environmentalists oppose that in part because San Diego county is home to more threatened and endangered species than any other county in the continental United States.

Monitoring groups say the broader challenges are varied. “Funding for fire hazard reduction activities such as creating defensible space, chipping and the removal of hazardous fuel materials such as dead and dying trees,” is the biggest street-level issue says Sheryl Landrum, vice-president of the fire safe council of San Diego county.

What’s clear is that just as the debate over how to keep wildfires at bay informed by science goes on, so too do the many ways they can damage lives.