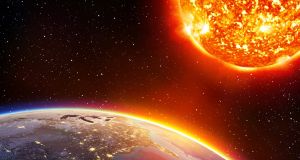 Nothing has so dramatically reconfigured the history of life on Earth as the epic mass extinction events that punctuate the fossil record stretching back at least half a billion years.

One such episode, known as the end-Devonian mass extinction (or Hangenberg Crisis), occurred 359 million years ago, and as many as 75 per cent of species disappeared during this tumultuous period.

While the exact trigger of this mass extinction event has been long debated, what is beyond dispute is that it involved a sudden and catastrophic depletion in the global ozone layer.

One theory published last September in the Proceedings of the National Academy of Sciences proposed that the effects of deadly cosmic rays from a Supernova explosion led to the destruction of the ozone layer. Its conclusions, however, remain speculative.

A paper published earlier last year in the journal Science Advances presents a more compelling and altogether more worrying scenario. According to this study, the end-Devonian extinction event was preceded by rapid warming, and it was this warming spike, not volcanic activity or cosmic rays, that led directly to massive ozone depletion and a subsequent spike in deadly UV-B radiation reaching the Earth’s surface and even penetrating into shallower ocean waters.

Lead author on the study, Dr John Marshall, professor of earth science at the University of Southampton was excited and alarmed in equal measure by the implications of the research. “There was a lot of push-back on our study when it was first published; obviously, we’re saying something quite big here,” he told The Irish Times.

“I felt like we had suddenly tumbled into a big secret in knowing how the world works, so I was actually slightly more careful crossing the road, because we wanted to communicate it.” The bombshell finding in Dr Marshall’s research is that while ozone depletion was the end-Devonian “kill mechanism,” the trigger was primed by rapid global warming.

The implications are stark, given that the Earth today is heating rapidly. “We’re now in this rate of fast warming, so you should be alarmed now - it’s a decadal problem, not a thousand-year problem, because the speed of warming is like nothing else the planet has seen,” Dr Marshall says.

During Earth’s last mass extinction event some 55 million years ago, known as the Paleocene-Eocene Thermal Maximum, rates of warming were 100 times slower than today’s human-induced climate shift, he notes.

Dr Marshall’s research team gathered rock samples from the mountainous polar regions in east Greenland, an area that was once an ancient lake bed in the Earth’s southern hemisphere. The team also collected samples in Bolivia, which would have been located close to today’s South Pole during the Devonian period.

On analysing the samples, they discovered microscopic plant spores right along the end-Devonian period showing clear evidence of ultraviolet radiation damage at the DNA level. Some of the spores were also found to have developed dark pigmented walls, as an apparent attempt to develop a protective “tan” against extremely high levels of UV radiation.

The question remained as to how exactly a spike in global warming, in the absence of a massive volcanic event, could lead to the virtual obliteration of the global ozone layer? This puzzle may have been solved by earlier research published by Dr James Anderson and colleagues in a paper in Science which noted the “increased risk of ozone loss from convectively injected water vapour”. This research, mainly carried out over the continental US, identified water vapour that that been convectively injected deep into the stratosphere.

This, they noted, “can fundamentally change the catalytic chlorine/bromine free-radical chemistry of the lower stratosphere” by transporting ozone-destroying substances such as chlorine high into the stratosphere. “This chemical shift markedly affects total ozone loss rates and makes the catalytic system extraordinarily sensitive to convective injection into the mid-latitude lower stratosphere in summer,” the paper observed.

The research concluded that if the intensity and frequency of convective injection were to increase as a result of climate forcing by the continued addition of CO2 and methane to the atmosphere, “increased risk of ozone loss and associated increases in ultraviolet dosage would follow”.

Such ozone depletion is already being recorded over the US as a result of the rapidly warming atmosphere, which is fuelling increased storminess and higher levels of atmospheric water vapour and provides the energy to sweep terrestrial elements all the way into the stratosphere.

CFCs were widely used in fridges, air conditioning units and as a propellant in aerosol cans


Ironically, the history of how the Earth’s ozone layer was inadvertently damaged during the 20th century by the widespread use of chlorofluorocarbons (CFCs) and how the international scientific and political establishment rallied to avert the danger is one of the great success stories of the modern era. It is often cited as an example of the kind of decisive science-led political action now sorely absent when it comes to tackling the global greenhouse gas emissions crisis.

Although apparently safe and inert, CFCs were widely used in fridges, air conditioning units and as a propellant in aerosol cans. Scientists Mario Molina and Sherwood Rowland shared the Nobel Prize in Chemistry for their work in showing how the ozone layer was the Achilles’ heel of the biosphere, and just how vulnerable it was to anthropogenic emissions of key chemicals which would eventually drift into the stratosphere, with potentially grave consequences for the ozone shield.

Their theoretical work in the 1970s was vindicated in the most dramatic fashion when, in 1985, the British Antarctic Survey reported drastic depletion of the ozone layer, the so-called ozone hole. Public alarm led to intense political action, culminating just two years later with the United Nations developing the Montreal Protocol in 1987, which was ratified by almost 200 nations. This led to the rapid phasing out of the most destructive ozone-destroying gases. Disaster had been narrowly averted.

Now, it seems the spectre of dangerous global ozone depletion may have returned. It is known that stratospheric ozone was also virtually obliterated during the end-Permian mass extinction event (or the Great Dying, as it is known) some 252 million years ago. In that instance, ozone was destroyed as a result of the emission of huge quantities of hydrothermal organohalogens following a prolonged period of massive volcanic activity.

What makes the ozone loss as a trigger for the end-Devonian mass extinction of pressing scientific concern is that it appears to have been precipitated by rapid global warming with clear analogues to the present day.

“Ozone loss during rapid warming is an inherent Earth system process, with the unavoidable conclusion that we should be alert for such an eventuality in the future warming world,” Marshall’s research paper concluded.

Among the biggest evolutionary losers in the end-Devonian die-off, which involved two discrete extinction pulses separated by around 300,000 years, were armoured fish, while sharks survived. Other casualties were ancient tetrapods with seven or eight digits per limb. Once this extinction period ended, the dominant number of digits became five. “It completely changes the terrestrial trajectory of life,” according to Dr Marshall.

The hypothesis presented by this new research remains to be definitively proven or rejected. The fact that the period in question is more than a third of a billion years ago further complicates matters. While crucial to life on Earth, stratospheric ozone is surprisingly fickle, according to Dr Marshall.

He hopes that, in time, researchers will have pieced together a definitive “ozone history” of Earth. His more urgent concern is his ozone hypothesis does not become a deadly reality in the coming decades.