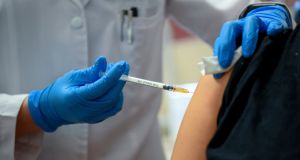 Needles make me squeamish. I don’t think I’m alone. This is only one of the many reasons that I did not become a doctor. But needles are very useful tools for delivering medicine and, of chief concern this moment, for delivering vaccines.

The exceptions were, for example, smallpox vaccines that were delivered by making a small cut in the skin. But while this worked to deliver enough vaccine lymph, it has to be said it wasn’t a very efficient way of delivering a medicine.

There are competing claims to being the first inventor of the hypodermic syringe. Some experiments had occurred in the 17th century that involved “needles” that were not at all narrow. Anyone for a sharpened quill stuck into your vein? No? I thought not.

An interest in local pain relief led doctors to explore ways of getting a drug under the skin in the mid 19th century. The syringe, or plunger part, had long existed as a technology. The innovation was coupling a tiny hollow needle with the syringe.

In 1844, an Irish doctor called Francis Rynd described treating neuralgia by injecting morphine under the skin. He has been suggested by some as the inventor of the hypodermic syringe but he didn’t use a syringe at all.

Instead, his needle sort of punched a little hole in the skin and then the medicine dripped in by gravity. A “proper” hypodermic syringe forces liquid through a needle and under the skin by the application of pressure.

Pain relief
Most historians now ascribe the invention to Alexander Wood of Edinburgh. Wood, like Rynd, was looking to relieve the pain of neuralgia in a patient. He was motivated to try hypodermic injection because his patient vomited when given morphine by mouth. His syringe was made of glass but the needle was metal and hollow with one end made into a point.

Wood was pleased with the outcome of his experiment and later wrote about it for a local Edinburgh medical journal. He presented it to the British Medical Association’s meeting in Edinburgh in 1858.

In describing his results he hinted at an even greater benefit of hypodermic injection, one that Rynd does not seem to have considered. The drug, morphine in this case, would be carried around the body by the blood stream. Injection would therefore provide more than local pain relief or indeed local delivery of a medicine.

Something similar to Wood’s innovation may have been used in Paris around the same time but it took quite a while to catch on more generally. The English doctor Charles Hunter seems to have been the first to grasp the importance of a local injection providing more general relief. Instead of injecting the sites of neuralgia in his patients, he injected them elsewhere and they experienced the same relief from pain.

You can probably already guess the downside to this story. Before the addictive nature of morphine was fully understood, doctors had invented a more efficient way of delivering it.

Injecting morphine seemed to be better tolerated than swallowing it. Some doctors became quite enthusiastic for treating their own neuralgia, over and over again. In other words, they became addicted to morphine.

The focus on using the syringe for pain relief is understandable. Morphine produced a noticeable effect in an era where such treatments were few and far between.

But use soon expanded with the discovery of new vaccines. In 1885, Louis Pasteur used a hypodermic syringe to administer his first rabies vaccine in Paris.

By the early 20th century the syringe was in higher demand and eventually became a key tool of vaccine delivery. Many of our hopes for a better future are now pinned on them.