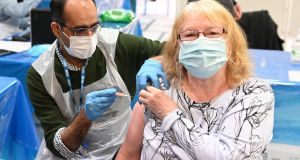 Pharmacist Murtaza Abdulkarim (L) administers a dose of the AstraZeneca vaccine at a temporary vaccination centre, staffed by pharmacists and pharmacist assistants, in Birmingham, England on Thursday. Photograph: Oli Scarff/AFP via Getty Images

British regulators have received extra trial data from AstraZeneca that supports their view that the Covid-19 vaccine developed with Oxford University is effective in the elderly, a vaccines official said on Friday.

Britain has been rolling out the shot among all age groups after the Medicines and Healthcare products Regulatory Agency (MHRA) was the first regulator to approve it in December, but some other European countries have said more data is needed before it is given to those over 65.

Munir Pirmohamed, chair of the Commission on Human Medicines’ Covid-19 Vaccines Benefit Risk Expert Working Group, said British regulators had noticed the smaller number of under-65s in the data when they approved the vaccine.

“Nevertheless, there was no evidence there, suggesting that those people over 65 were not getting evidence of efficacy,” he said at an MHRA news briefing, asked by Reuters about efficacy of the shot in the elderly.

“Since then we’ve seen more data coming through from AstraZeneca as more people are completing the trial, which highlights again that efficacy in the elderly is seen, and there’s no evidence of lack of efficacy.”

He added that elderly people were generating strong immune responses, and said that the most important thing was that both AstraZeneca’s vaccine and a shot developed by Pfizer and BioNTech were preventing serious disease and deaths.

President of the European Commission Ursula von der Leyen has said that the EU has decided not to compromise on safety as she defends the slower pace of approval of Covid-19 shots in the bloc.

Asked about the suggestion that Britain had compromised on safety and efficacy standards, MHRA chief executive June Raine defended the regulator’s standards.

“I think our position is very clear in terms of the rigorous science that MHRA pursues in the interests of public confidence, public safety, and the effectiveness of these important vaccines,” she said.

Oxford researchers who developed the vaccine say the jab has a similar efficacy against the variant, compared with the original strain of Covid-19 against which it was tested. Experts had been concerned about whether or not the vaccines currently being administered throughout the UK would be effective against the strain, which emerged after vaccine trials had been conducted.

The preprint also describes analysis which suggests vaccination with the AstraZeneca jab results in a reduction in the duration of shedding and viral load, which may translate into a reduced transmission of the disease.

Andrew Pollard, professor of paediatric infection and immunity, and chief investigator on the Oxford vaccine trial, said: “Data from our trials of the ChAdOx1 vaccine in the United Kingdom indicate that the vaccine not only protects against the original pandemic virus, but also protects against the novel variant, B117, which caused the surge in disease from the end of 2020 across the UK.” – Reuters/PA

6 Food intolerance group to double workforce as it expands

7 Buy a property with your pension? Government says no