Despite being banned, the toxic root pesticide is clearly being used to target birds nationwide 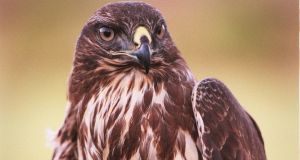 In May, it emerged 23 common European buzzards were poisoned with carbofuran. Photograph: Frank Miller

“Carbofuran has the unpleasant distinction of being so hazardous to wildlife, that it simply cannot be regulated or managed accordingly without mortality.”

So states forensic ecologist and conservationist Dr Ngaio Richards in her book, Carbofuran and Wildlife Poisoning, which provides an overview of the global research on this toxic root pesticide.

Indeed, this sentiment and the evidence that underpins it is strong. Yet, despite a European ban on the use and trade of the root crop pesticide, its illegal use in wildlife persecution incidents around Ireland continues to be persistent.

Carbofuran made headlines in May, when details emerged about the fatal poisoning of 23 common buzzards with the substance. This crime, which was discovered by a Cork landowner in late December 2019, was brought to light by the Golden Eagle Trust, who deemed it “the biggest illegal act against birds of prey in Ireland, over the last two decades”.

“Illegal poisonings are widespread,” he says. “Knowing the extent of illegal persecution and specifically, illegal poisoning, it’s not surprising that this incident occurred and unfortunately, incidents such as this one will continue to occur until further action is taken.”

Despite being banned, carbofuran is clearly being used to target birds nationwide. Since its establishment in 2011, the NPWS-led Raptor (Recording and Addressing Persecution and Threats to Our Raptors) protocol has brought attention to this issue. This project, which aims to detect anthropogenic non-habitat related impacts to Ireland’s native raptors, has repeatedly reported that “carbofuran continues to be one of the primary poisons detected annually”.

The 2019 report notes it was detected in eight of 22 recorded poisoning incidents that year. This does not include the Timoleague buzzards, as the investigation into their deaths commenced in January.

Following the Timoleague incident, the Golden Eagle Trust laid out several proposals, including a move to “draft and enact a defined piece of legislation which makes it illegal for anybody to be in possession of carbofuran and several other lethal substances, whose former agricultural uses have been banned and phased out”. Indeed, there has long been ambiguity surrounding the legality of carbofuran possession.

However, when contacted, the Department of Agriculture, Food and the Marine confirmed that possession of carbofuran is “illegal”; a statement echoed by the Department of Culture, Heritage and the Gaeltacht (DCHG).

“Approval for the use of carbofuran products (which had been used as a crop dressing) was withdrawn in all of EU in 2007 and revoked in Ireland on December 12th, 2007, which was followed by a “sell out and use up” period of 18 months rendering carbofuran banned from use from June 2009,” the DCHG adds. “After this date, carbofuran products are classified as hazardous waste. Possession of hazardous waste for more than six months is unauthorised and EPA are the regulating authority.”

When contacted, the Environmental Protection Agency stated that they were “not the competent authority in relation to the use and control of pesticides”. The agency’s own role relates to the permitting of hazardous waste facilities and transfer station which may handle this type of hazardous waste, the spokesperson added.

A clearly defined law surrounding carbofuran possession would facilitate the ability to detect and charge a raptor persecutor, whose attacks against wildlife are often elusive. However, carbofuran isn’t the only offender.

“It’s not only banned substances that can be used,” says Lusby. “Everyday substances can also be used in an illegal manner and can be just as devastating.”

The many methods employed in raptor persecution are outlined in the 2019 Raptor report, which also logs deliberate poisonings using other substances, including those involving poisoned meat bait; shooting incidents; road collisions and accidental secondary poisoning from rodenticides.

In 2019, Raptor recorded a total of 39 incidents, reflecting the highest number of cases for any year since it formally began. The report acknowledges this figure is “likely to be only a fraction” of total incidents.

“This is only a sample of what’s actually happening in the wider countryside,” comments general manager with the Golden Eagle Trust, Lorcán O’Toole.

There are a number of national and European laws that cover the persecution of raptors and other wildlife, including the Wildlife Acts, the EU Birds and Habitat Regulations and the 2010 ban on the use of poison bait. However, despite these laws and an awareness of the issue, enforcement remains low and any prosecutions result in minimal fines.

Environmental groups have long called on the Government for a stronger approach to tackling wildlife crime. While noting Raptor as “a step in the right direction”, Lusby says wildlife crimes “are not being taken as seriously as they should be”.

“We fully recognise that they are multifaceted complicated issues and because of that, it takes a layered approach to tackle them, but a huge part of that is effective investigations and effective enforcement. At the moment, that’s something that we’re falling short of.”

Lusby says establishing a dedicated wildlife crime unit within the NPWS would assist with this, a proposal made by Irish wildlife groups during National Biodiversity Week 2020 – and many times before.

O’Toole also highlights the need for a wildlife crime unit, along with equal law enforcement nationwide and more transparency in wildlife crime investigations.

The recent mass poisoning has brought wildlife crime back into the spotlight but for O’Toole, it represents “more than a wildlife crime”.

“This is an attack on nature, the landscape, natural heritage, the society and the community of Cork, west Cork in particular. That’s where the debate needs to broaden out into.”

Considering Ireland’s declaration of a climate and biodiversity emergency in 2019, taking strong action against a chemical that is so hazardous to wildlife and indeed, against wildlife crime as a whole, is vital.

While the legality and motivations surrounding use differ by region, the environmental threat posed by carbofuran is a worldwide issue. In Ireland, we have data on raptors. However, research elsewhere illustrates the harm it can cause to other species, humans and the wider environment.

For example, in Kenya, the indirect and direct poisoning of birds, hyenas, camels, lions and other species using carbofuran has been widely reported. A 2010 study there also detected high carbofuran residues in plant, water and soil samples in an area where it had been extensively used on farmland.

Though Dr Ngaio Richards says cessation in carbofuran manufacture “would be a big step in the right direction” in any effort to tackle related wildlife persecution, she says many factors must be simultaneously addressed.

“Even if a global ban were to be agreed overnight, there is still plenty of carbofuran out there. Absent carbofuran, someone who wishes to poison or otherwise dispatch animals will find another means of doing so, whether using another pesticide, or toxic agents – or another method altogether,” she says. “The practice of poisoning is very entrenched, and the root causes must be addressed, with workable solutions being offered, devised in consultation with those being asked to alter their livelihoods or means of subsisting.”

Commenting on Ireland’s situation, Richards says: “I would argue that situations like the one in Ireland do represent an area where it is well worth stepping up efforts to secure convictions and penalties, especially given general public feelings on the matter. In other cases and locations, a different approach – less punitive, more on the outreach side – is going to be far more effective long term.”