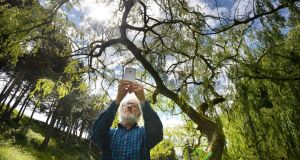 Developing the skills to recognise different species of animals and plants enables us to enjoy our landscapes as more diverse and richly populated places. Such skills also empower us to contribute to well-informed environmental policy through citizen science.

Many of us, however, find identifying species a daunting challenge. Even if you are moderately knowledgeable about birds, for example, because of a life-long hobby, learning to distinguish trees can still be baffling at first. As for grasses, insects, arachnids, and fungi, the vast diversity within each group can quickly scramble your brain.

Today, however, apps promise to unscramble this confusion for you. There are more available all the time, and they claim to be increasingly accurate. Until recently, however, they have mostly been limited to just one taxonomic kingdom, plants.

Enter Seek, a recent subset of iNaturalist, an initiative of the Californian Academy of Science and National Geographic. It’s free to download to your phone. It claims to be able to identify, almost instantly, many species across the world, from the animal and fungi kingdoms as well as flowers and trees. So you can try it on beetles and on giant redwoods, on sedges, finches, mushrooms and squirrels.

Seek has another attractive characteristic too. Most popular identification apps require you to take a photograph, submit it online, and then consider a number of species options that the app suggests from its database. This is true of Pl@ntNet, PlantSnap, and Seek’s own big brother, the iNaturalist app, which also operates across taxonomic kingdoms.

This is helpful for specialists, already familiar with the species in question, but it can seem complicated and off-putting to beginners and amateurs.

With Seek, however, as soon as you point your phone at a distinguishable object, it will begin an almost instant onscreen count-down through five taxonomic categories, from kingdom to family. It may then pause before advancing to genus, and it will pause a little longer before reaching, all things being equal, to species.

And you can use it to trawl through your past photos, searching out identifications that may have evaded you years back.

It is also designed to be child-friendly, as it operates offline and does not require you to join any social network. It includes gaming elements, too, so that you can compete with yourself for “badges” and “challenges”. This feature may engage some of us and irritate others. You can always ignore it.

But does Seek really work? The idea that any phone-based system can identify such a wide range of life forms seems, even our age of AI, a little too good to be true. Over a two-week trial, however, I’ve found that it can work remarkably well, despite some notable glitches. In the first hour, it correctly identified a peacock butterfly, a (dead) wood mouse, a jay and a foxglove.

I’m still a happy novice at plant identification after a decade trying, but at least I’m now fairly aware of what I don’t recognise. This ample category includes the members of the “hawkish complex”. These are common plants whose flowers, and often their leaves, look very like dandelions. But they belong to almost a dozen genera, most with several species apiece: catsears, hawkbits, nippleworts, hawksbeards, hawkweeds, sow-thistles and so on.

I had long given up on this group, but with Seek I was able to quickly establish that most of the genera are present in hedgerows within a kilometre of our home in Glenmalure. And checking these identifications off a good field guide confirmed that the app was getting the genera consistently right.

Going to species level in several of these genera is much trickier. A serious botanist, and anyone submitting good records for citizen science, would painstakingly “key out” all characteristics of each plant observed, using a dense botanical guide like Webb’s Irish Flora. But at least the app was pointing me in the direction of a particular genus to consider.

The same was true for some trees. At the Furry Glen in the Phoenix Park I tried it on the elegant trees at the head of the pond there. It quickly proclaimed them to be “willows”, but would go no further in specifying this notoriously difficult genus.

With familiar and more easily distinguished plant species I generally found it remarkably accurate, but I found one instructive error. It had correctly identified sheepsbit, a lovely blue, scabious-like wildflower, on a roadside bank. But when I picked a blossom and put it in a glass of water, the app decided it was a “California sea urchin”. Presumably, the plant’s purple colour and prominent anthers, very broadly similar to a sea urchin’s spines, combined with the water in the image, sent it off in an almost comically misleading direction.

This kind of error is not new to the app’s creators. Tony Iwane of iNature gave me another example, which illustrates how the iNaturalist and Seek apps’ “learning ability” evolved:

“In early tests of computer vision, we hadn’t trained on photos of humans. So submitting a photo of a human would often result in the suggestion of a western fence lizard, at the time the most observed species on iNaturalist. One possible explanation is that a good number of fence lizard photos featured human hands, so that might have been the closest match to human.”

Iwane reminds me that “Seek’s machine-learning model is based entirely on observations from . . the iNaturalist community, so it’s really the hard work of thousands and thousands of people on iNaturalist that enables Seek to function.”

iNaturalist’s blogexpands on how recognition models for these apps are still developing. A second apparent confusion, however, turned out to be very fruitful, and indicated how Seek may help us engage more deeply with connections between species. I was testing it on a hogweed umbel, and to my surprise my screen popped up with “spindle ermine moth”.

On closer inspection, I found that the umbel held a number of small caterpillars weaving a web. I haven’t been able to check out the identification independently yet, and hogweed is not listed as one of the usual plant habitats for this moth’s larva. But I can now investigate further.

So I’m beginning to see carrying the app as rather like walking with a more observant and (usually) much better-informed companion. And if I want to dig deeper, I can, of course, use the iNaturalist app, or something similar, like Pl@ntNet, which both allow you to consider a range of options, and to post questions and observations to their communities online.

“For wild plants, I’ve used Pl@ntnet. The key thing is taking pictures of different parts of the plant (flowers, leaves, habit etc). I find it’s good to narrow down plants to Family/Gensus, and then I use the keys in Irish Flora to double-check.”

“Basically I would not recommend it. I feel it makes the user lazy and doesn’t encourage an enquiring mind to try and learn the way into the subject.”

“The only way to learn [the craft of species identification] is to go through the process of keying out features and understanding what to look for. At best, apps can only be ‘suggestions’ and . .narrow the possibilities. If people understand that, and confirm what an app tells them by other sources, then great.”

4 Up to 600 doctors may leave Irish health system in July, IMO warns