Coronavirus: Early vaccines may help but not halt the pandemic 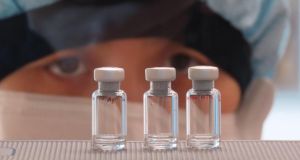 A team of experts at the University of Oxford are working to develop a vaccine that could prevent people from getting Covid-19. Photograph: Sean Elias/PA Wire

There’s enormous pressure on authorities to solve the Covid-19 pandemic. A vaccine is one potential solution. In July, US president Donald Trump toured a vaccine facility in the US and promised to defeat the virus, but this is a huge ask.

Scientists doubt a vaccine will offer complete protection and early vaccines are unlikely to allow a return to normality in 2021, they believe. The speed of Covid-19 vaccine trials has been impressive, made possible because scientists and companies retooled strategies they were working on for other diseases.

“The guys at Moderna are heroes for developing a vaccine within three to four months,” says Irish immunologist Dr David Dowling at Boston Children’s Hospital and Harvard Medical School, but he and others describe the vaccines making news headlines as “first wave vaccines”.

“People over the age of 70 still might not be able to get this vaccine because it might not work for them,” warns Dowling. After a PhD in Dublin City University, Dowling joined vaccine scientist Prof Ofer Levy at Harvard to make universal vaccines for early and late in life.

Yet, once healthcare workers receive a vaccine, the next group most in need are older people. “The number one risk factor for Covid-19 is age. The second one is age. The third one is age, so over 80, over 70 and over 60,” Dowling adds.

Results from vaccine trials have all been from young healthy adults. This will change soon.

“We are vaccinating a lot of older people and we will publish those results,” says Dubliner Prof Adrian Hill, who heads up the Jenner Institute at Oxford University. Their vaccine is being tested on thousands of people in the US, Brazil and South Africa and could be one of the first approved.

Hill is confident about their candidate, which appears to be leading the world right now, but he – like everyone else – is waiting for more results from volunteers taking the vaccine. What’s interesting about results released so far this summer, he adds, is that both arms of the immune system were well stimulated by the vaccine, known as ChAdOx1.

“People are describing it as a two-hit vaccine, and that’s certainly what we were aiming to do,” says Hill. Volunteers receiving the vaccine show a strong antibody response, but also a robust response from T cells, which can kill cells infected with viruses.

The design of the Oxford vaccine helps. It involves injecting a weakened chimp virus with genetic instructions for the spike protein of Sars-CoV-2 and its presence inside cells pokes the immune system into action. The fact that the (non-replicating) virus enters cells sets off alarm bells for the immune system and promotes a T-cell response.

Still, there are unknowns. What that level of response should be to give a person protection from Covid-19 is as yet unclear.

“The biggest question in the field is how strong an immune response do you need to induce protection,” Hill says. “Most people talk about neutralising antibodies because they don’t induce high levels of T cells, but we do.”

“The elderly will be a big challenge to vaccinate,” says Prof Kingston Mills, immunologist at Trinity College Dublin. “It is too hard to say which approach is likely to be effective in them. We don’t have any data.”

Dowling has tested some Covid-19 candidate vaccines in elderly mice. His early results suggest that vaccines that work well in young animals often don’t work well in aged rodents. “Age really matters for this virus,” he says, and it is really hard to get aged mice to make antibodies against it.

Two years from now we may have vaccines that work well in healthy adults, Dowling points out, but there is a strong possibility that “grandparents and kids won’t be able to hug two years from now because the vaccine might have efficacy of only 20 per cent in kids and elderly”.

One option could be to give more shots or to increase the dose in older people. Dowling says Moderna’s results with its RNA vaccine suggest that using a higher dose would increase side effects such as pain and malaise, which could put people off taking the vaccine.

He is investigating “adjuvants” for future Covid-19 vaccines. These are chemicals that can prod frontline immune cells into action, boosting antibody and killer T-cell responses. Dowling’s research, however, is a few years away from bearing fruit.

To have any chance of eradicating Sars-CoV-2, a vaccine would need to achieve “sterilising immunity” – a level of immunity that stops the virus replicating. Therefore, vaccines are not a silver bullet for healthy adults.

“None of the vaccines look like they have a hope of producing sterilising immunity,” says Danny Altmann, professor of immunology at Imperial College London. “That means we are always going to be looking long haul at knocking this out through a vaccine and behavioural measures.” So a vaccine may not mean an instant end of social distancing, face masks or cocooning.

Some early results point to a number of Covid-19 vaccines preventing severe disease, but not stopping the virus replicating in the nose and throat. In this way, a vaccine could save lives but allow for more asymptomatic individuals. A similar phenomenon happens with pertussis vaccine, which prevents whooping cough, while permitting the bacteria to infect people.

“You would prefer a vaccine to completely protect you, but there are very few vaccines that do that,” says Prof Hildegund Ertl, a vaccine scientist at the Wistar Institute in Philadelphia. She says additional or higher doses may be needed in the elderly.

“The way I look at these vaccines is that they are a first round,” says Ertl. “The first vaccine is not going to be the final vaccine. We can improve on them.” She says getting the death rate down to 0.1 per cent – similar to the flu – would be a really great start. “At long as we can keep the elderly away from incubators and the graveyard, I’m all for that.”

Altmann sees vaccine success in a similar light. He hopes that in February 2021 a vaccine will allow us avoid nightly news images of overflowing hospitals. Instead, there could be “a grumbling spread of a rather unpleasant lung disease”; presenting new challenges.

Complete eradication of the virus is improbable. Four coronaviruses, which cause common cold symptoms, seem to have jumped over from animals to people in past centuries and remain widespread. Sars-CoV-2 is likely to hang around until it too becomes another “common cold” virus, but we don’t know how long it could take for this to happen.

“Nothing is written in stone with a new pathogen,” says Prof Dennis Burton, immunologist at the Scripps Research Institute in La Jolla, California. He is optimistic about a Covid-19 vaccine. It looks more straightforward than developing vaccines for HIV, malaria or tuberculosis, he stresses.

But Burton too cautions against expectations of a cure-all vaccine. “It may not prevent all disease,” he says, but a vaccine that blunts Covid-19 in a large number of people would be very welcome.