Explore from sea to stars at the Festival of Curiosity

A thrilling mix of science, art, technology and design awaits young and old at this year’s event 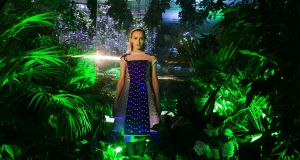 If you are in the mood for exploring, then be sure to seek out the Festival of Curiosity, a four-day cornucopia of science, art, technology and design in Dublin from July 19th to 22nd.

Now in its sixth year, events in the Festival of Curiosity are more family-oriented during its “playful days” and are more suited to adults during its “curious nights”, according to co-founder and creative director Ellen Byrne. “Exploration is a big theme for us this year,” she says.

Some of the festival favourites are returning for 2018, including the Curiosity Carnival at Smock Alley Theatre, which is encouraging children to bring in their teddy bears and learn more about health and the body and practise their fledging surgical skills. “We will have a section where the children can look inside teddy bears and even carry out transplants,” says Byrne.

Other daytime events include bubble shows, creative soundscapes and urban treasure trails, or if you want to look back in time you can take a guided stroll to look for fossils embedded into Dublin’s structures.

As part of the festival, Dublin Maker will take place in Merrion Square, where inventors and makers will display and demonstrate their creations. The popular day-long event attracts thousands of visitors and will this year feature about 50 makers and a wide range of creations, explains co-founder and engineer Dr David McKeown. “It is a great day out and you will see things you won’t see anywhere else,” he says. “There will be lasers, traditional spinners and weavers, computers and 3D-printing, physics buskers and lots of inventions. It’s about showing the creative culture of making in Dublin.”

The festival nights will also be buzzing, with events such as stargazing at Dunsink Observatory, an evening at the Life at the Edges exhibition at Science Gallery Dublin, a supper club and The Happy Hack. A happy hack? “We will bring scientists and comedians together to hack the secret to happiness,” says Byrne.

From the depths to the heights

Extreme environments form the backdrop for several events at this year’s festival. YouTuber and Blue Peter Science Guy Greg Foot has experienced many, and will talk about his scientific adventures diving deep below the sea’s surface in Deep Ocean, and will explore what happens to the body at altitude in Everest Lab.

Dr Niamh Shaw will look even further afield as she talks about how to train for outer space in an event designed for children. “I’ll go through some of the exercises you can do to get fit to go to space,” she says. “I’ll also be explaining how gravity, or the lack of it, affects our bodies, and sharing videos of my latest space adventures.”

In a separate event, Shaw will host a Q&A with director Emer Reynolds following a screening of The Farthest, a documentary about the deep-space exploring spacecraft Voyager. And, closer to terra firma, Shaw will share another of her passions: beekeeping. “I’ll be talking about the three hives myself and Dad have, and what people can plant in the garden to help bees,” she says.

It’s this kind of eclectic mix that Shaw loves about the festival: “It is sparking people’s curiosity and not necessarily putting a label on it of science or engineering or maths. It’s rooted in curiosity and it brings in so many different perspectives, from artists and scientists and technologists and designers, and it gets people involved.”

For the Festival of Curiosity programme and to book tickets, see festivalofcuriosity.ie