EU Contest for Young Scientists: How a liquid starch material can give tough results 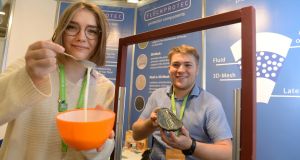 Anna Fleck and her brother Adrian Fleck, from Germany, with their project at the European Union Contest for Young Scientists, at the RDS, Dublin. Photograph: Dara Mac Dónaill

There are distinct advantages when a brother and sister work together on a scientific endeavour, according to Adrian Fleck (20) and Anna Amelie Fleck (16).

The siblings, representing Germany at the EU Contest for Young Scientists (EUCYS) at the RDS in Dublin, have exploited those advantages to develop a body protection material from starch.

What’s more, when worn it is ultra-flexible, as it comes in the form of a liquid rather than hard plastic which would reduce an athlete’s freedom of movement. When a strong force is applied the liquid turns into a solid, providing reliable protection from injury as a result. There are obvious benefits for cyclists, skiers and skaters, Anna Amelie explained.

She started the project three years ago when it “was chemistry and physics” but she then encountered a technical problem, which prompted her to consult her brother, “a technology geek”. Adrian went on to develop a “drop test device” and 3D scanner to evaluate the material known as FleckProtec, and compare its performance with other commercial products.

The key attribute of starch mixed with water was its “non-Newtonian property” which allows it to solidify and liquefy depending on conditions.

“Most of the time, we get on well together,” Anna Amelie pointed out. The benefits of brother and sister doing research together are “you can be really honest with one another, and say if something is not working”. In addition, communicating opportunities are enhanced because they see each other so much, she added.

Representing Canada, Brendon Matusch (15) from Sudbury, Ontario, developed his own autonomous vehicle with software to test its responsiveness. The vehicle is controlled by “neural networks”, computer models designed to simulate the behaviour of the brain.

The student, who is attending Lo-Ellen Park Secondary School, won the Canada-Wide Science Fair earlier this year with his prototype, which successfully responds to signals on steering, speed control and sign detection.

He is particularly pleased with what he describes as “a new algorithm which enables the vehicle find the middle of the road”, and technology whereby the vehicle learns how to improve performance as it encounters various conditions in the course of driving.

Representing Hungary, Blanka Novak (18) extracted an antimicrobial compound from the goji berry, which is proven to reduce the presence of the superbug known as Pseudomonas aeruginosa. The opportunist bacteria infects patients undergoing chemotherapy or people with cystic fibrosis when their immune system is weak.

Her research emerged from a search of scientific literature in English and Chinese she had undertaken in an attempt to find out if her aunt, who had cancer and was undergoing chemotherapy, might benefit from a change of diet – she subsequently died from a P. aeruginosa infection.

She regarded coming to Ireland for EUCYS as a great “present”, so much that she didn’t find the five rounds of judging stressful. She enjoyed being quizzed about her work. “I want to continue it at college in Eger, ” she told The Irish Times.

Judging panel chairman Prof Tony Fagan of UCD said the standard of EUCYS continues to be extremely high, while he was impressed by the “purity of intent” shown in projects, such as those on the environment and using recyclable materials.

The mixture of basic and applied science was wonderful and “lifts the spirit”, he added. He paid tribute to 20 experts from around Europe who took time out of their busy lives to judge the entrants, all of whom had won major national competitions.

A lot of projects this year were based around 3D printing, he said, while in previous years, for example, there was an emphasis on drones or artificial limbs. “The fashion changes but scientific and engineering urge is there, I think it’s innate. It behoves teachers and mentors to encourage it; to never put it down. That is the spirit of this event.”

The contest was also important in underlining the importance of Stem (science, technology, engineering and maths) subjects, Prof Fagan said. The EUCYS 2018 winners are to be announced at an event in the Printworks, Dublin Castle, on Tuesday.