Number of female students in chemical, physical and mathematical category up 62% 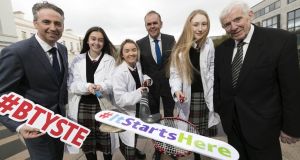 For the 11th year running, there are more girls (56 per cent) than boys competing in the BT Young Scientist & Technology Exhibition. Photograph: Chris Bellew/Fennell Photography

There are strong indications that more female students are embracing chemistry, physics and maths; subjects traditionally dominated by male students. This is reflected in entries to the 2109 BT Young Scientist & Technology Exhibition.

For the 11th year running, there are more girls (56 per cent) than boys competing, indicating a positive trend in girls engaging in the subjects of science, technology and maths at secondary school level.

There is also a 62 per cent increase in the number of girls qualifying for the Chemical, Physical & Mathematical Sciences category, compared with 2018.

This year, 1,137 students will exhibit 550 projects across four categories which also include Biological & Ecological Sciences, Social & Behavioural Sciences and Technology.

Overall, 237 schools from across Ireland are sending students to the exhibition at Dublin’s RDS from January 9th to 12th.

The projects for the 55th staging of the contest reflect issues of ongoing global concern, with almost 100 qualified projects tackling climate change and environmental issues; doubling last year’s projects on the topic.

Other projects touch upon topical issues from cervical cancer screening, the alternatives to and benefits of antibiotics; the growing impact of social media; gender diversity and enhancing bee populations.

Since its inception the exhibition has played an integral role in inspiring a love of science, technology, engineering and maths (STEM) among younger generations.

It has been the starting stage for some of Ireland’s most successful entrepreneurs and researchers with notable alumni including computer game developer Steven Collins (1986-87), co-founder of Havok and Swrve; Patrick Collison (2005), co-founder of Stripe; Kate and Annie Madden (2016), founders of Fenu Health; and Shane Curran (2017), founder of Evervault and listed among the “Forbes 30 under 30”.

Minister for Education Joe McHugh said he was heartened by the number of students and schools that put forward innovative and pioneering projects.

“The project title trends always show you what is important to young people in Ireland and this year it is no different with extremely topical themes such as climate change and the environment to the fore,” he added.

His department was continuing to highlight the importance of STEM education, especially at a young age, “so when the BT Young Scientist & Technology Exhibition starts, we love to see all the bright minds of STEM putting forward suggestions on how to make the world a better place.”

BT Ireland managing director Shay Walsh said the excitement was building in schools across the country as students completed their projects. “Each year, we endeavour to make this exhibition better than ever before . . . 2019 is no exception. The projects themselves are the main act, and once again, the creativity and talent of these young people will amaze visitors.”

The overall winner will represent Ireland at the EU Contest for Young Scientists in Bulgaria in September 2019.

More information, including on booking tickets for the exhibition, is available at btyoungscientist.com