From sailing on a rhumb to flying on a geodesic

That’s Maths: Pedro Nunes, a Portuguese cosmographer and one of the greatest mathematicians of his time, was first to develop a mathematical basis for navigation 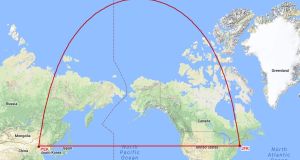 If you fly 14,500km due westward from New York you will come to Beijing. The two cities are on the 40th parallel of latitude. However, by flying a great circle route over the Arctic, you can reach Beijing in 11,000km, saving 3,500km and much time and aviation fuel. The route following the parallel of latitude maintains a compass bearing of 270 degrees relative to true North, crossing every meridian at a right angle. In contrast, the great circle route provides the shortest distance between the two cities, but the compass direction varies along this route.

A route that crosses every meridian at the same angle is called a loxodrome, a word that means “running obliquely”. For short voyages at low or middle latitudes, a loxodromic course is close to the minimum distance route, as it deviates only slightly from a great circle. However, at high latitudes, loxodromes are not suitable for navigation: they ultimately spiral repeatedly around the poles.

Loxodromes were first discussed by Pedro Nunes in 1537 in his Treatise in Defence of the Marine Chart. Nunes, a Portuguese cosmographer and one of the greatest mathematicians of his time, was the first person to develop a mathematical basis for navigation. This was a subject of vital importance in Portugal during the 16th century: sea trade was the main source of Portuguese wealth. By means of such mathematical advances, new worlds were discovered and vast riches were found. As Nunes wrote, “The Portuguese dared to take on the great sea and ocean. They discovered new islands, new lands, new seas, new peoples; and what is more, new heavens and new stars.”

Nunes established a systematic programme to transform navigation into a precise science. Thanks to his work, navigation was put on a firm mathematical foundation, just as astronomy had been solidly mathematical for many centuries. His discoveries were disseminated widely throughout Europe and had great influence. John Dee, cosmographer to Queen Elizabeth I, was instrumental in transferring the discoveries of Nunes to England, which was at that time mathematically backward. Thomas Harriot, mathematical adviser to the adventurer Walter Raleigh, also studied Nunes’ works closely.

Nunes demonstrated how a ship sailing on a fixed compass bearing would not follow a great circle route but a loxodromic course – which he called a rhumb line – that winds in decreasing loops towards the pole. He made a clear distinction between navigation along a great circle, the geodesic or shortest distance between two points, and navigation on a rhumb. He also provided a detailed and sophisticated mathematical analysis of the rhumb line.

The most popular map projection for many centuries was that devised by the Flemish cartographer Gerard Mercator. Mercator was familiar with the work of Pedro Nunes, and the Mercator projection has the valuable property that all rhumb lines are straight lines on this map. Following Nunes’ work, Mercator drew rhumb lines on a globe, and included them on his global projection. This made it very convenient for navigators, who could plot their course from port to port with a ruler, and follow it by maintaining a constant compass bearing. The expression “sailing on a rhumb” is still used to describe such a course.